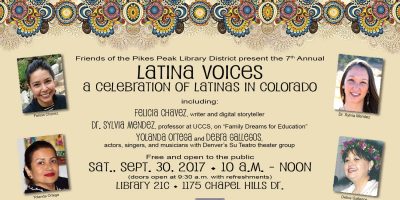 Colorado and the Pikes Peak region are home to many talented Latinas. Some of them will be showcased at the 7th annual Latina Voices.

Colorado and the Pikes Peak region are home to many talented Latinas. Some of them will be showcased at the 7th annual Latina Voices.

The women featured in this year’s event include:

Felicia Chavez is a digital storyteller whose work is featured regularly on National Public Radio. She holds an M.F.A. in Creative Nonfiction from the University of Iowa. She is the former program director to Young Chicago Authors and founder of GirlSpeak, a literary webzine for young women, Chavez teaches creative writing and new media as a Riley Scholar-in-Residence at Colorado College.

Yolanda Ortega and Debra Gallegos will perform as a musical duo.

Ortega is an actor who has been performing music and theater in Colorado and the Southwest for more than 40 years as a member of Su Teatro, a Denver theater company. She also has performed as a musician with the company for main stage productions.

She is best known for her dramatic and comedic performances in “Bless Me Ultima,” “El Sol Que Tu Eres,” “The Miracle at Tepeyac” and “Chicanos Sing the Blues.” She was recently inducted into the Su Teatro Chicano Music Hall of Fame, along with her long time singing partner, Debra Gallegos.

Gallegos has been performing music and theater in Colorado and the Southwest since the 1970s. As a member of Su Teatro, she has served as both actor and musician with the company, and has also directed several mainstage productions. She sings across Colorado, directs community theater productions and works with like-minded performing artists in bringing a progressive voice to the Colorado theater community.

A long-time Denver city employee, she also has been involved in community empowerment efforts for many years. Now retired, she continues her work as a community volunteer in numerous community-based organizations including KUVO Radio as a co-host of Cancion Mexicana.

Sylvia Mendez is an associate professor and chair of the Department of Leadership, Research, and Foundations at the University of Colorado at Colorado Springs. Her research centers on the educational achievement and schooling experiences of Mexican-descent youth in the mid-20th century and higher education student success.

About the Friends of the Pikes Peak Library District

Free. Reservations are not required.

Substantial refreshments will be available before the program starts at 10 a.m.