Mix in Violet, the drugged-up, scathingly acidic matriarch, and you’ve got a major play that unflinchingly—and uproariously—exposes the dark side of the Midwestern American family.

Doors and box office open 30 minutes prior to the show. 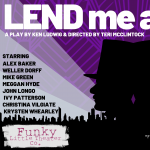