Based in Colorado Springs, Forté is an advanced handbell quartet marked by artistry, energy, and dedication to their craft. In pursuit of musical excellence, Forté strives to explore, innovate, inspire, and glorify God through the gift of music.

The musicians of Forté – Luke Nabeta, Megan Reishus, Dillon Ekle, and Tory Marting – continually challenge themselves to “Rethink Possible,” expanding their musical and performance horizons and adding original compositions and arrangements to their ever-expanding repertoire, while challenging audiences’ perceptions of what handbells can really do.

Since forming in 2007, Forté has had an increasingly active schedule of concerts and recordings, made possible with the help of their growing team of supporters.

They have been featured performers and faculty at Handbell Musicians of America events, have presented several successful tours across the country, and released two CDs and a DVD of music videos filmed around the state of Colorado.

There will be a free will offering. 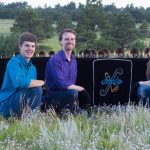