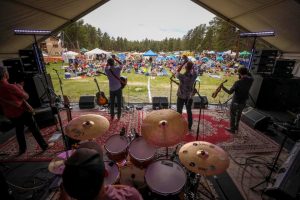 Jeremy Facknitz has been entertaining audiences with his lovingly crafted music and high-energy performances for over 20 years. Since the 2002 break-up of his Detroit-based band “The Ottomans” (2001 Detroit Music Award Winner, Best New Alternative Band), Jeremy has performed primarily as a solo act, marrying folk-rock and jazz stylings to showcase his intimate stories of life, love, and self-discovery.

David Siegel maintains an active performance schedule and holds a degree in violin performance from the Manhattan School of Music in New York City. He has opened for the Yonder Mountain String Band and performed alongside Dr. Billy Taylor, Adrian Cunningham, and Earl Klugh. David is a member of several performing ensembles including Grass it Up and Mango fan Django, named best bluegrass and jazz bands respectively by the Colorado Springs Independent. David also serves as music adviser for the Green Box Arts Festival and has commissioned several new symphonic, choral, and chamber works for the festival.

Feel free to bring drinks and snacks for yourself and/or to share. This is an outdoor event unless the weather dictates we need to move indoors.