The West Gallery in Kreuser Gallery is proud to present “GROWING,” oil paintings by Neil Fenton.

Neil Alden Fenton, a Colorado native, grew up in the San Luis Valley and moved to the front range in 1997. Over the past two decades, he has shown in several Colorado galleries and has had several solo exhibitions.

In addition to his paintings and drawings and illustrations, Neil has created a number of public works, including a bronze sculpture purchased by the Manitou Springs Arts Council in 2011, and the infamous “GuerniCAR”, a mural on a 1985 Chevy Caprice referencing Picasso’s famous antiwar painting.

His love of art began at an early age, beginning with ceramic sculpture in his parent’s pottery studio and cartooning and comics leading to drawing and eventually painting. While he is primarily self-taught in his approach to painting, he has had an array of thoughtful and talented mentors and instructors, inspiring the variety of mediums, styles and techniques that he employs.

He lives with his wife, baby daughter, and two cats near downtown Colorado Springs and works in his backyard studio and garden. 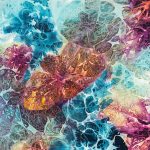 'A Whisper and A Shout' 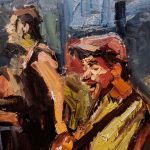 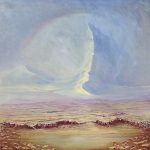 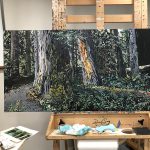