'I Ought to be in Pictures' 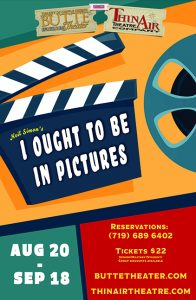 One of Neil Simon’s greatest stories with fantastically comedic dialogue that touches your heart & soul.

Neil Simon will have you laughing one minute & in tears the next, in this play (later made into a film with Walter Matthau & Ann-Margaret) that revolves around a struggling screenwriter & his estranged daughter who surprises him when she moves to Hollywood to get into the movies.

Filled with guilt & demanding love, Libby not only forces her dad to deal with the responsibilities of parenthood, but to come to terms with his on-again/off-again girlfriend.