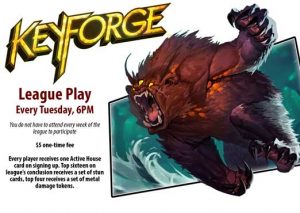 Enter a world where anything is possible in KeyForge!

In the center of the universe hangs the Crucible, an artificial world built from the pieces of countless planets.

$5 entry covers four weeks of play and prize support at the conclusion of those four weeks.

Every player receives one Active House card on signing up for league play.

December 25 is Christmas Day and January 1 is New Years’ Day.