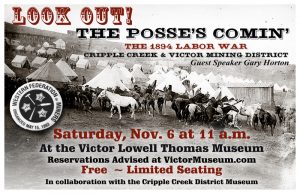 Join us for ‘Watch Out – The Posse is Comin: The 1894 Labor War,’ a presentation by Gary Horton on the labor strike of the Cripple Creek Victor Mining District.

A free presentation on the 1894 Labor War will be hosted by the Victor Lowell Thomas Museum Saturday, November 6 at 11 a.m.

The presentation will be made by Gary Horton of Victor, who researched and developed the presentation on behalf of the Cripple Creek District Museum. He will share that presentation at the Victor Lowell Thomas Museum Nov. 6.

The 1894 Labor War that began with unrest over wages was a five-month strike by the Western Federation of Miners in Cripple Creek and Victor. In January 1894, some Cripple Creek mine owners, who together employed one-third of the area’s miners, announced a lengthening of the work-day to ten hours (from eight), with no change to the daily wage of $3.00 per day. When workers protested, the owners agreed to employ the miners for eight hours a day – but at a wage of only $2.50. A strike ensued.

The strike was characterized by firefights and use of dynamite, and ended after a standoff between the Colorado state militia and a private force working for owners of the mines.  It resulted in a victory for the union.

The presentation is free and open to the public