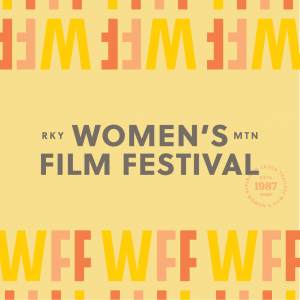 The Rocky Mountain Women’s Film Festival is dedicated to celebrating the drive, spirit, and diversity of women. Now in its 32nd year, it is the longest-running women’s film festival in North America, presenting both documentaries and narratives, features and shorts.

Rocky Mountain Women’s Film kicks off a three-day celebration of cinema with an opening night gala at the Cornerstone Arts Center at Colorado College followed by two full days of film screenings.

Over the course of the weekend, approximately 40 films will be presented at five venues across the Colorado College campus. Guest filmmakers from across the country will be attending and Q&A’s will be offered at many of the screenings.

Many long-time film fans and local cinefiles take full advantage of all the weekend has to offer, watching as many films as the schedule allows.

Other people prefer to dip in and out, sprinkling other activities in with their film viewing. However you choose to fest, we have a pass or ticket option to allow you to enjoy the Festival at your pace.

It isn’t a festival without some festive activities to complement your film watching! Make sure to build in some time to relax and recharge, whether it’s by attending any of the filmmaker panels, or just taking a break from film-watching to enjoy a cup of coffee or something to nosh on from one of the food trucks.