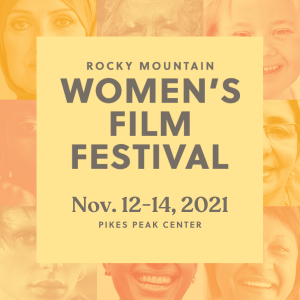 Share in this annual community tradition as audiences reconnect in Downtown Colorado Springs for three days of unique and diverse storytelling through more than 20 narrative, documentary and short films.

After going virtual in 2020, we are thrilled to kickoff the 34th Annual Rocky Mountain Women’s Film Festival together in-person!  Start out with the Friday Opening Night Film, followed by two full days of 20+ film screenings, Saturday After Dark and filmmaker forums all at the Pikes Peak Center in Downtown Colorado Springs.

The longest-running women’s film festival in North America honors films and filmmakers that present the world as women experience it. The Rocky Mountain Women’s Film Festival showcases documentary, narrative, shorts, and animated films that are thought-provoking, enriching, and encourage both global awareness and personal growth.