The Elovaters with Artikal Sound System 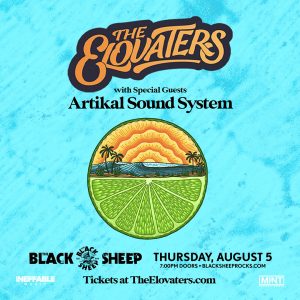 Join us at the Black Sheep for a night of music with the Elovaters with Artikal Sound System on August 5!

The Elovaters are one of the fastest rising groups in the American reggae scene. It’s an ascension that’s come through constant touring in support of acts like Stick Figure, Pepper and Ziggy Marley to eventually headlining clubs throughout the country. In 2020, the group’s monthly Spotify listeners grew 606%. It would be a high watermark that kept the group in good spirits despite having to spend over a year off the road.

The Elovaters formed in 2014 and have released two full length albums and an award-winning EP. Defy Gravity was the group’s first big record in 2018 after signing to not-for-profit record label Rootfire Cooperative. Debuting at #1 on the Billboard Reggae chart and iTunes Reggae chart, Defy Gravity was produced by Danny Kalb and the single “Live By The Day” caught the attention of Jimmy Buffett’s team who programmed it into regular rotation on SiriusXM’s “Margaritaville” station. The band’s success with SiriusXM has gone on to include the singles “Criminal” and “Fast & Slow” added to regular rotation on Kenny Chesney’s station “No Shoes Radio.”