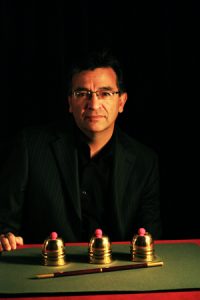 Cosmo Solano began performing "professionally" (meaning getting paid for it!) in his early teens, and at the age of 19 left for Hollywood to pursue a career in show biz.

At 21, He became a member of the world famous Hollywood Magic Castle where he would be mentored by contemporary masters in sleight of hand. Over the next few decades, he would meet and become close friends with many of the very legends he admired as a child.

For over 35 years Cosmo has since performed for heads of state, celebrities and leaders in business and industry. After nearly 20 years in L.A. and a few years in Las Vegas,  Cosmo returned to Colorado seeking a more family oriented environment and now resides in Colorado Springs, CO.

He's been ranked by his peers in the magic industry as one of the top Sleight of Hand performers in the business.  Cosmo has become internationally known among his peers for inventing unique magic effects used by some of the world's top magic performers, his creations have been performed by magicians on shows such as America's Got Talent and Penn and Teller's "Fool Us".