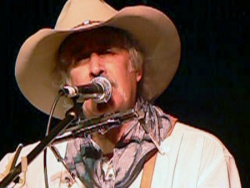 Noted Nashville Pulitzer winning photographer Kal Roberts sums up artist Clay Canfield with the following quotation: "Mix sweat with earth, throw in a little blood and you create your own person."

Clay's life and music seem to parallel those words. Clay grew up in Wichita, Kansas. He moved to Houston, Texas and was based there for 12 years. Clay was signed with an independent Nashville label and in 1983 and 1984 charted four consecutive singles on Billboard. These successes lead to opening dates for Vern Gosdin, Eddie Raven, Steve Wariner and B.J. Thomas as well as touring on his own. Performing carried Clay back to Nashville in 1993. Clay's original songs, impressive guitar skills and haunting delivery made an immediate impression on music industry professionals and enabled Clay to gain fans world-wide. Tired of the southern summer climate, Clay decided to re-locate to Colorado where the beauty of the mountains has always inspired him to write and play music. His original songs are already gaining attention. Chris LeDoux recorded Clay's song "Buffalo Grass" on his last album.