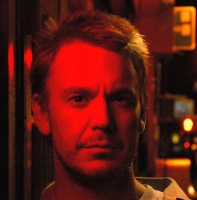 Donald Herbert Goede (III) is primarily an art director, curator, and publisher. He was one of the original co-founders of Soft Skull Press in NYC and creator of the art imprint, gallery, & bookstore Soft Skull Shortwave. His most successful books have been Popaganda: The Art & Subversion of Ron English, Hi, How Are You? The Life & Art of Daniel Johnston, and Painful But Fabulous: The Lives & Art of Genesis P-Orridge (founder of Throbbing Gristle, Coum Transmissions and Psychic TV) He currently is creative director of Smokemuse a multi-media company in Colorado Springs. One of his passions is uniting communities through concerts and exhibitions. He did this for many years in New York's Lower East Side and in Brooklyn but is now concentrating in the High Plains. Some of his brain children in the Colorado Springs area (so far) are Rico's (with Richard Skorman), Red Note Jazz & Wine Fest (with Brad Bietry), Blues Under The Bridge (with KRCC), and The Toilet Paper (with Noel Black) (This underground publication's success gave birth to the current sub-culture newspaper Newspeak! and a book is currently in negotiations.) He facilitated and photographed The Blue Star Cookbook for Joseph Coleman, Jr. by James W. Davis and Molly Wingate. His most recent book Eros On Canvas: The Erotic Paintings of Laura BenAmots will be released nationally and worldwide in August 2008. He sits on the advisory board of the Broadmoor Academy of Music and the Pikes Peak Arts Council and considers himself a Friend of the Fountain (Uncle Wilber) He is an avid art collector and advocate for the arts & culture in Colorado Springs. As an artist he works in all mediums. Goede also works as a music producer and manager of Jack Medicine, The Electric Ghosts, The Hyperjinx Tricycle, The Electric Illuminati, and the newly formed children's band The Smiles. His latest book project with Ron English, called Abraham Obama, will also be released as a documentary. He also will be directing and producing a yoga program in 2009 for yogini and artist Kat Tudor.