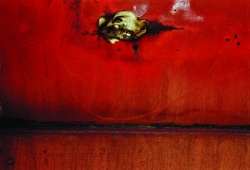 Tim Davis has lived in Colorado Springs since 1969 when he was stationed at Fort Carson. He attended Colorado College where he received a BA in Sociology and an MA in Teaching. He has taught thousands of students, elementary through high school, for thirty years. Though he had teenage interest in the artistic use of photography, he didn't begin his photographic arts career in earnest until the fall of 2000. Inspired by Julia Cameron's book, The Artist's Way, and with encouragement from his wife, Susan Garsoe, and friend, Bruce Hamilton, he brought some pictures into public view. With further support from his photography group, Circle of Confusion, and Rodney Wood, then director of the Business of Art Center, he applied for and received his first solo show. Tim Davis has shown his work in galleries in Seattle, New York City, Santa Fe, Cape Cod, Los Angeles,and Mammoth Lakes as well as in Denver, Boulder, and his hometown, Colorado Springs. His works have been purchased for public buildings and private collections. From 2005 to the present, Tim has published nationally distributed calendars featuring his photographs. In 2005, 2007, and 2008 he was one of three the Pikes Peak Arts Council nominated Artist of the Year.