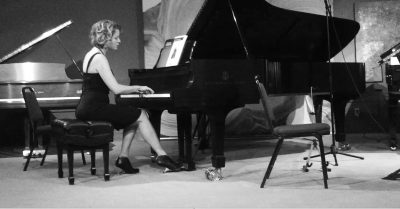 Lauren Ciborowski began playing piano at the age of 5 and has not stopped since her mastery of "The Little Tugboat."  As an Army brat, she has lived, and thus performed and studied, all over the United States and Germany.

In 2009, she opened an award-winning gallery in Colorado Springs, The Modbo, out of which she runs a musical cabaret.  She has worked as a professional pianist for nearly a decade, and is an accomplished ballet accompanist.  Lauren also plays chamber music, plays and sings with her band, and maintains an active teaching studio in downtown Colorado Springs.