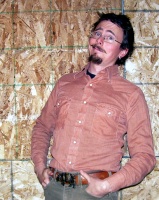 Jeffrey DeMers was born and raised in Colorado Springs but now resides in the San Luis Valley in Southern Colorado with his lovely wife, two dogs, and two cats. When he was young he was introduced to art through the works of C.H. Rockey and Starr Kempf, both of whose art struck a lifelong chord with him. His influences extend beyond local artists but are too numerous to list here (although more than a few surrealists make the list). He's been working with "bioform" shapes in his art for eight years. The idea to create large, layered pieces came to him in a sort of "eureka" moment a couple years back just as he was going to bed. From there it evolved to include moving parts as well as a part-time collaboration with local artist/poet/musician/soup eater Chris Bullock. When not working on his art he works on: completing his strawbale home/studio.