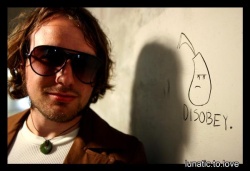 Firstly, to set the record straight, Nik Arnoldi does not suffer from delusions of a talking pear or a giant orange cougar.

That said Nik began his career in the sleepy Midwest city of Green Bay, Wisconsin, where he painted murals for several private residences and businesses to supplement his income while finishing high school. The lure of the big city life convinced him to study at the Art Institutes International: Minnesota, in Minneapolis, where he received his Bachelor's degree in Media Arts and Animation.

It was in Minneapolis that the inklings of Coffeestain Comicks began as a comic "journal" to test his storytelling skills. It was also in Minneapolis where Nik unknowingly invented a direct animation technique, which he used to complete his first short animation film, "The City". After graduation, Nik taught after-school classes at Marcy Open School to offer youngsters the chance to expand their drawing skills, and even create comic books of their own. The class was a success, and students from other classes even submitted their own comic books to what became an anthology of all their work, which they could trade and enjoy.

Shortly thereafter, he expanded his horizons across the Atlantic and spent the summer living in Europe, where he painted canvases in England and a mural in the Netherlands.

Returning to his hometown was a triumphant one indeed, where he was selected to work as resident artist in Green Bay's Neville Public Museum "Studio 210" program. After completing his term there, he put on two solo shows, a "post-studio" opening and a "leaving home" show.

Nik has just recently relocated to Colorado Springs, Colorado, and establishing himself here in the mountains.

He's a busy guy with a beautifully flexible schedule, so if you're interested in collaborating ideas or commissioning a piece of art, all you need to do is type a few sentences in an email. If you'd like to discuss rates or availability, send me an email: contact@nikarnoldi.com And if you just want to keep up with his crazy antics, check the blog. Vote on which paintings should be produced in fine-arts prints, see works in progress come to fruition, and most importantly, have a laugh or two... on him. Life's too amusing to not share those bits of oddity.