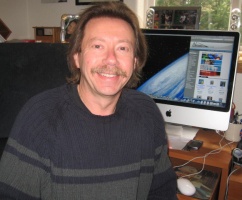 Hello there. I am a musician, composer, arranger, film scorer, drummer/percussionist, studio producer/engineer, theatrical lighting designer, chief cook, husband and father. Born in 1956, I started playing drums at the age of 8 and have been at it ever since. I studied classical percussion from members of the Minnesota Orchestra, was principle tympanist in the Greater Twin Cities Youth Symphony, and performed under Aaron Copeland and Stanislav Skrovechevski. I attended Berklee College of Music, graduating in 1978 with a B.A. in Music Composition with an emphasis in Film Scoring. While attending Berklee, I was a teaching assistant in the film scoring department and wrote and produced scores for two Boston University Graduate films, including "The Dragonfly", which was entered in the 1978 American Film Festival. After graduation, I co-founded the original progressive rock/fusion jazz band "North", based in Minneapolis MN. North toured the country and recorded for 6 years. After North, I continued to perform in various bands and played in studio sessions in the twin cities area for many years afterwards. In 1997, along with my wife Hillevi Peterson Hirsch, I started Platamoose Productions, a multi-track digital recording studio. At Platamoose I produced and engineered recordings for a wide variety of artists in the twin cities, covering folk, pop, rock, bluegrass, and classical music. I started doing technical theatre in high school, focusing (pun intended) on lighting. Over the years I have designed and run lights for many productions including Oliver, The Hobbit, You're a Good Man Charlie Brown, Guys and Dolls, Godspell, and The Lion, The Witch, and The Wardrobe. I also acted as music director for a number of these productions. For the last 8 years, I have worked for Norcostco Inc., a national theatrical sales, design, and supply company, initially at their Minneapolis home office, and now in Colorado Springs, as an outside sales person, designing and installing theatrical lighting systems, draperies and rigging. I am happily married to my best friend, Hillevi, who is also an accomplished singer songwriter, actress, dancer, choreographer, director and teacher. We have 5 children, 3 cats and 2 dogs. We moved to the Colorado Springs area in June 2009 to fulfill a 17 year dream of living in the mountains.