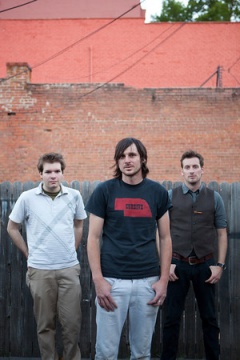 Headhum was formed in 2009 by Andy Tanner, previous lead singer of Laymen Terms, current local singer songwriter talent. After his release of Suitcase Full of Air in 2008, Andy promoted his more serious and emotional solo work throughout the Pikes Peak region and abroad. An expansion in attitude and musical atmosphere lead him to begin another project inspired by 90’s grunge esthetic and the intent of playing music which could be simply hard, fast, fun, and rock. Andy collaborated with previous drummer Jonathan Johnson and bassist Noah Harpman to develop Headhum. The project was later completed with new bassist Brett Andrus, previously apart of Aria Tari and local Modbo/SPQR gallery owner. Since the release Of Manican, Headhum’s first album, the project has grown into regional and Midwest success. The growth of Tanner’s projects has resulted in the launch of DESTINATION MOON MUSIC, Tanner’s production company that incorporates the business of all his musical collaborations including Headhum. This union has produced the participation in several projects including Modbo’s musical collaboration with Mark Arnest and Colorado College Summer Music Festival classical ensemble and also collaboration with other artists including singer Kellie Palmblad (Tanner’s other duet project Constellation of Cars).Headhum has performed at Studio B, opened for large national acts such as Antique Scream and popular locals such as El Toro and The Pirate Signal. They are currently planning a third tour this summer. For more information www.destinationmoonmusic.com or destinationmoon.bandcamp.com foralbum and free downloads. Catch Headhum Friday April 22nd at the Zodiac with The Flumps and Govt. Camp!