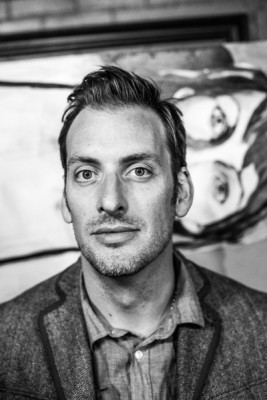 A Colorado native, Brett Andrus studied painting and art history at the Savannah School of Art and Design before returning home to Colorado in 2001. Andrus divides his time between a career in the financial industry, co-ownership (with his wonderful wife Lauren) of the award-winning art galleries The Modbo and S.P.Q.R., directing and teaching at the newly formed ModboCo School of Art at Ivywild, working as a musician (in projects that include Waterbear, The Men of Deep Throat, Team Laser Wolf, and Headhum), and producing as a disciplined artist. Over the last fifteen years, Andrus has exhibited his work in Santa Fe, Denver, Atlanta, New York City, New Orleans, Trinidad and Colorado Springs. Andrus’ newest body of work is an experiment in working in a manner that was new and uncomfortable to him– many of the pieces are small, mixed media drawings, done on a more intimate scale. Thus the show’s title, “Hypothesis.” Andrus sees these pieces as an homage to the process changes he has embraced in the past few months. However, despite the new media, the new scales, he remains firmly in the realm of the narrative figurative, seeking to connect with the viewer on a sensual and emotional level. The viewer in these pieces acts as both witness and voyeur– sharing a clandestine moment with the artist’s subjects. Influenced by Egon Schiele, Kent Williams, and Jenny Saville, Andrus uses his fascination with realism to find his contemporary voice within the constructs of the classical female form.