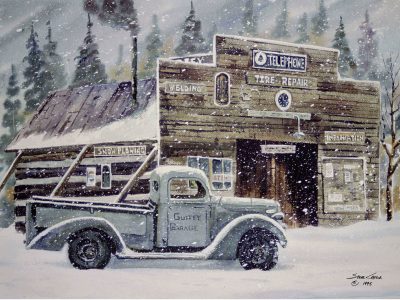 Watercolorist Steve Castle grew up in the rural snow country of upstate New York along the Mohawk River.  The influence of this beautiful area, where the winter can often be six months long, is apparent in his nostalgic snow and country scenes.

He has been drawing and painting as long as he can remember.   After college Steve entered the Air Force and one of his first assignments was in the beautiful city of San Antonio, TX where he displayed his watercolors in front of the Alamo and along the Riverwalk.   In 1978 he moved to Colorado Springs, which he has called home ever since.   The spirit of the west can now be seen in his watercolors.   He is continually driving the back roads in search of that old ghost town, covered bridge, train, depot, barn or mill that waits to be painted.    Unfortunately, many of the scenes Steve has painted have disappeared.  He is dedicated to recording and helping preserve this landscape heritage through his paintings.

Steve is a former president of the Randolph Art League in San Antonio and the Colorado Springs Art Guild.  He has also been a member of the San Antonio Watercolor Group, Dayton Society of Painters and Sculptors and Pikes Peak Art Association.

Steve's watercolors have won numerous awards and can be found in collections throughout the country.  They have been displayed in galleries in Texas, Ohio, Mississippi and Colorado where his winter landscapes have become his trademark. Steve has taken workshops from internationally recognized watercolorists but he continues to strive to maintain his own individualism and unique style in his watercolors.