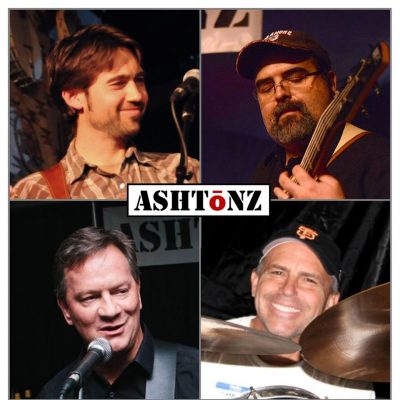 Oklahoma native Charlie Searle grew up in Evergreen, Colorado, where he formed Ashtōnz with co-Evergreeners and brothers Neil and Scott Bremner.

He piddled around with the guitar and singing until 1985, when he was hired by the late James T. "Happy" Shahan to join the summer music and gunfight program at Alamo Village in Brackettville, Texas. He stayed in Texas after his second Alamo Village summer (1986), joining Sergio Salinas, brothers Andy and Luis Perez and Gus Garcia in the band Mesquite, which played south Texas danced halls from '86 through '88.

Afterwards, Charlie went on extended musical hiatus until 2010, when a "wild hair" resulted in an Ashtōnz appearance (with Neil Bremner) at the 30-year reunion of the Evergreen High School class of 1980. Charlie laid the guitar down for another couple of years until one more wild hair landed Ashtōnz 2.0 a New Year's Eve performance an the annual "Alcothon" in Colorado Springs. The lid now having been pried off the music jar, the following months saw the Ashtōnz landing gigs in Colorado Springs, Monument, and Palmer Lake.

Playing on a more or less monthly basis around Monument in 2014, the Ashtōnz' approach of "attitude over aptitude" and commitment to having fun (and to not taking themselves too freakin' seriously) has gained the band a faithful following of amusement-seekers in the area.