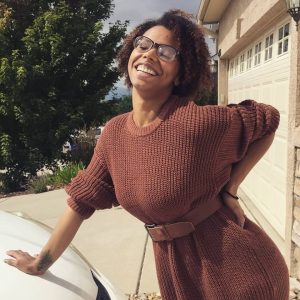 Kailani Dobson's main goal is to portray current issues in an abstract way in order to not only bring attention to the problem, but also make it more bearable for the audience. Dance and movement has become her way of coping with world and inspiring change throughout her community.

Kailani has danced with Pikes Peak Community College's High Altitude Dance Ensemble under the direction of Stephanie Kobes-Newcomb. During Kailani's time at PPCC she has created multiple solo works as well as a few short dance films.

Kailani is an administrative assistant at Ormao Dance Company where she has had the opportunity to develop better social media and website building skills. Under the direction of Jan Johnson, Kailani was given the opportunity to run an event for the dance company. The Open Stage event brought in 20 different artist from all over El Paso county together for a night of art that included; dance, visual art, spoken word, and short films. Kailani has also produced a short dance film called "Persistance" about the refugee crisis and the effects war has on the people. Kailani recently worked on the project "Petrified" which touches on the need for women to acknowledge their strength and come together as a unit which she re-edited as commissioned by Ormao Dance Company for their Company Salon Showcase in 2017.

Outside of dance film and choreography Kailani explores more performance art, in order to mix dance with art installations and creating art alongside other types of artists. She most recently presented, with the help of Pikes Peak Art Council and the Cultural Office of the Pikes Peak Region for ArtPOP 2017 in which she created a 15-foot tall glass structure with running water that she maneuvered throughout for an hour inside of the Manitou Art Center.