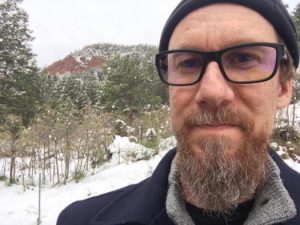 Michael Andrew Doherty is a life-long musician and composer, a painter (ink), and writer. Since 2008 his musical focus has been on the Japanese bamboo flute called shakuhachi in terms of composition, performance, as well as instrument-building.

His three shakuhachi teachers all lived in Japan extensively and learned shakuhachi from the venerable masters, Okuda Atsuya, Yokoyama Katsuya and Taniguchi Yoshinobu. Thus, the Dokyoku and Zensabo performance styles are deeply ingrained shakuhachi sensibilities. In addition to these and other Japanese aesthetic confluences, his shakuhachi performance and compositions are also informed by a long personal history in experimentation and listening precipitated by the American Modernist composers John Cage and Morton Feldman, as well as the Acoustic Ecology/phonography and Wandelweiser movements.

Michael’s compositions have been studied and reviewed, internationally (Ethnomusicology Forum (2017), Paris Transatlantic (2005) and New Music Box (2005)), and his theatrical sound design has also won awards in his native Denver, Colorado.  Largely, a self-taught musician, outside of shakuhachi, he has had potent interactions that heavily influenced his compositions in the personages of Dr. Robert Cavarra (CSU, Fort Collins), Ben Johnston, and Udo Kasemets.