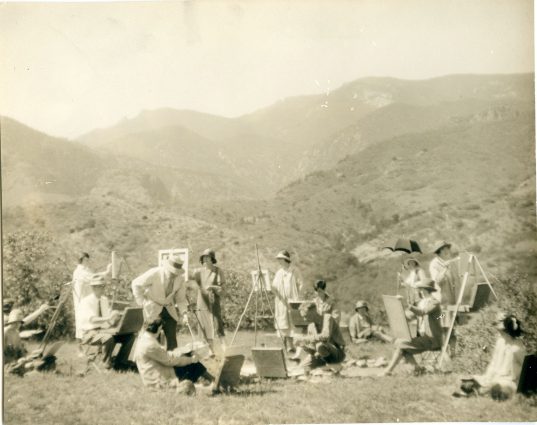 A class of the Broadmoor Art Academy out and about.

Anniversaries can mean different things — joy, remembrance, even sorrow. For the Colorado Springs Fine Arts Center at Colorado College, their year-long 100th anniversary celebration seeks to honor the rich cultural history of the region, and the…

Anniversaries can mean different things — joy, remembrance, even sorrow. For the Colorado Springs Fine Arts Center at Colorado College, their year-long 100th anniversary celebration seeks to honor the rich cultural history of the region, and the people and events that shaped its growth from the Broadmoor Art Academy in 1919 to the FAC in 1936, and beyond.

For curator of modern and contemporary art, Joy Armstrong, this means crafting a series of four museum exhibits that tell a story of always-evolving artistic ideals across a century.

O Beautiful! Shifting Landscapes of the Pikes Peak Region follows a timeline from around 1870-1970, examining the earliest artists in the region, why they came and how their artistic ideals started to coalesce. In those early years, tracing the artists is fairly equivalent to tracing the history of the academy and FAC. They were founding personalities, board members and key figures in the transition from the academy to FAC, helping develop the region’s art identity.

Another component of the exhibit is “shifting perspectives,” sidebars that provoke attendees to be critical of historical truth, reexamine the art from our modern perspective and explore their own alternative viewpoints.

The second exhibit opening of the year, Scenes from Life: Drawings by Bernard Arnest, is a series of 51 large drawings that showcase his reactions to a world he decided was essentially tragic.

“[Scenes] is really a demonstration of his thoughtfulness as an artist,” Armstrong says. “They are difficult works to be with — he was responding to the global events of the ’70s — but they feel contemporary.”

Notes from the Musick Collection will open Aug. 3. Archie Musick was a student at the academy, and had relationships with many of the founding characters. He even published a book — Musick Medley: Intimate Memories of a Rocky Mountain Art Colony, which looks at his experiences and local contemporaries in an entertaining tabloid format.

In concert with his daughter Pat, the exhibit will focus on the family collection Archie accumulated through the years, which includes art but also historical FAC artifacts, including diaries, announcements and postcards.

The Broadmoor Art Academy and Its Legacy, 1919-1970 will premiere in the middle of Arts Month this October, focusing on how the artists that studied and worked in the area influenced each other, and how that influence spread throughout the country and across time. It’ll include private and public works, with pieces from the Smithsonian and Denver Art Museum.

“This will really demonstrate the influence of the academy,” Armstrong says. “It’ll look at the art artists brought with them to the region and what they learned and experienced while they were here, and what they did when they moved on. There was a really powerful impact on the development of American art identity.”

This exhibit will also explore how artistic approaches that are now widely accepted may have been reviled and misunderstood in their time.

“We can look to the past to come to terms with the styles,” Armstrong says. “There is this continuity in the continuum of art history — if we can understand where things come from, then hopefully we can at least appreciate them.”

Part of Armstrong’s work is to look forward, to where she sees the FAC in the future, both through these exhibits and beyond.

“We are product of what has come before. [These shows] allow us an opportunity to see what they are as part of the era gone by, though they may be offensive or shocking now. We don’t condone them, but we can dig into them and attempt to understand where they come from and where they’ve gone,” Armstrong says.

One of the growing challenges for cultural institutions Armstrong sees is growing competition for time, attention and dollars.

“We can no longer expect that when we do something we feel is important, that people will come to us,” Armstrong says. “We have to ask questions of ourselves and be open to criticism.”

Beyond preserving the existing collection and remembering their core values, Armstrong hopes the FAC seeks out new opportunities — to intentionally reach new audiences and serve the whole community, take risks with challenging and provocative work, and utilize technology to evolve the role of the museum. And, fight the notion that a museum is full of dusty objects that you possibly can’t relate to. It is a place for learning, connecting, experiencing and growing.

“There are different ways to view what a museum does. It’s a shift from museum as temple, playground of the elite, and exclusive to museum as classroom, community center,” she says.

But why, now, come to the FAC?

“People from any background can develop a relationship with something that will leave an impact,” Armstrong says. “You won’t like everything, but there will be something you fall in love with.”

Originally written by Jonathan Toman of the Cultural Office and published in the Colorado Springs Independent Abstractions section on January 24, 2019.