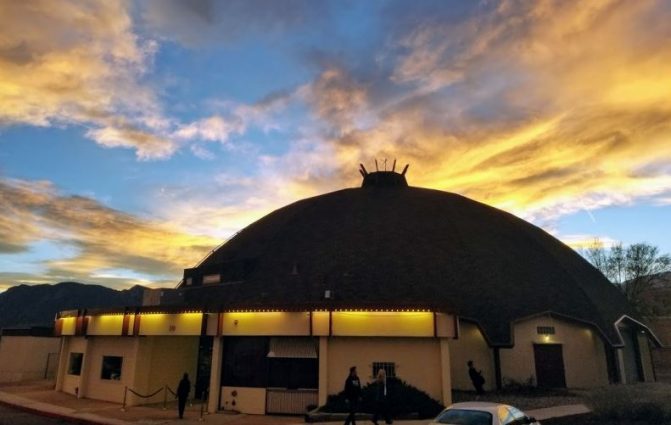 Attendees stream out the doors and into the Stargazers Theatre and Event Center's foyer, bustling from excitement after the evening's entertainment. One woman makes a bee-line to co-owner Cindy Hooton and her husband John as they…

Attendees stream out the doors and into the Stargazers Theatre and Event Center‘s foyer, bustling from excitement after the evening’s entertainment. One woman makes a bee-line to co-owner Cindy Hooton and her husband John as they greet their guests with flyers of the upcoming shows. “She said she and her husband hadn’t been out on a date in years,” Cindy recalls, “‘Now he wants to know what’s happening at Stargazers next week!'”

“People will come up and give us high fives, hugs and tell us what a great time they had,” Cindy says.

It’s easy to get the Hootons to talk about their brainchild as they reflect on a 10-year love affair with music and what the future holds for the venue.

“This has been both the fastest and the longest 10 years of our lives,” says John.

The building now known as Stargazers was built in 1969, and has seen life as a movie theater, heavy metal venue, and even a church. John and Cindy purchased the building in April 2008, spending 10 months on extensive renovations before hosting their first event in February 2009. They’ve since racked up over 1,700 shows, averaging between 150 and 170 per year.

The space hosts events of all moods, from quiet reflections to raucous celebrations with a 200-person conga line lead by Cindy. The flexibility of the building allows the Hootons to use the floor space for a variety of uses, too, like table seating or a dance floor (occasionally activating what Cindy calls Stargazers’ “honky-tonk mode”).

The goal is to have a warm and welcoming venue no matter the event, as well as featuring great artists — and audiences — of all genres. The Hootons find value in the venue’s central location and easy parking in addition to the variety of events they put on. And they strive to make shows accessible to everyone — sometimes even free of charge — and showcase local talent and international touring artists.

By intentionally blending local, regional, national and international acts, John and Cindy have approached Stargazers as not just a music venue, but an incubator to grow the local music scene. John describes the venue-band relationships they’ve built as atypical, creating something mutually beneficial for both sides. The Hootons even go as far as finding artists for tribute shows and pairing local bands with international talent as openers.

“We like bands who pay their dues,” John says. “We see them work hard, and then we work hard for them.”

But live music is only part of the Stargazers story — the Hootons saw an opportunity to leverage their performance space and give it back to the community. The venue is known to host film festivals including the Rocky Mountain Women’s Film Institute Shorts Night each April, and benefits like Pikes Peak Blues Community and other nonprofit events every year.

“We saw that there was a need for this in the community, so we said ‘let’s run with it,’” John says. “It’s not always about the money, sometimes it’s about doing the right thing.”

The couple has called Colorado Springs home since 1988, and are thrilled with the growth of local talent, venues and potential in the area.

“Anything that gets people off the couch and to a live venue is good for everyone,” John says. “You’re starting to see the scene simmer, and it’s getting ready to boil. This can be a huge music town if the current momentum keeps going.”

As for the future, Stargazers’ centers around the building itself — upgrading the sound system, floors, and anything else that needs revamping. That, plus continuing the high energy passion the Hootons bring to their work everyday.

“It’s a work in progress, there’s a lot more to be done to get Stargazers fully blossomed,” John says. “It’s fun and rewarding to do this.”

Check out Peak Radar’s conversation with John and Cindy.

Originally written by Jonathan Toman of the Cultural Office and published in the Colorado Springs Independent Abstractions section on February 12, 2019.