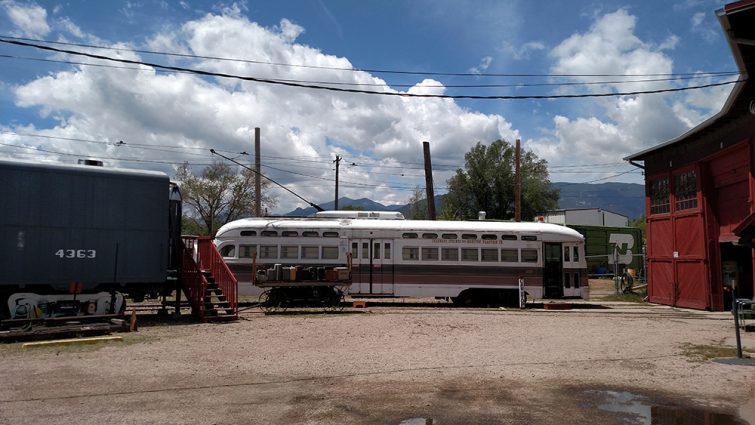 The working trolley at the museum stands ready. Credit: Cultural Office of the Pikes Peak Region.

Note: This article is part of a monthly column written by Jonathan Toman that explores cultural organizations in the Pikes Peak region and the personalities that power them. Jonathan serves as the Peak Radar Manager…

“…no…” I say, suddenly concerned that I had taken a seriously wrong turn, or been abducted by aliens. The Director of Outreach for the Pikes Peak Trolley Museum and Restoration Shop assures me I’m still in the heart of Colorado Springs, but will need to do a little time travel.

The museum’s campus sits just off I-25 and Fillmore, located in what was once Roswell, Colorado. A rail town that even had its own racetrack, Roswell was annexed into Colorado Springs in 1909. The museum is housed in what once was a roundhouse, though its original footprint was adjusted over time by a flood and runaway train from Falcon.

Benson says she’s become captivated by the history of Roswell. She’s been a flight attendant and worked at a veterinary clinic, but tracing her family’s spotty history has led to a passion for preserving. That spirit and appreciation of history powers the present-day museum. The nonprofit Pikes Peak Historical Street Railway Foundation, started in 1982, operates the museum, which is run entirely by volunteers.

“Most of our volunteers get involved because they’re interested in something here – antiques, old photographs, the cars themselves,” says Ron Oatney, Manager of Streetcar Operations and Crew Training. Around 10 volunteers rotate on a regular basis, averaging between one and three days a week.

That group handles everything from guest tours to crafting a monthly publication. But there’s also an expanded network that helps with the other half of the house – working on restorations of trolleys and train cars. They’ll often build specific parts at their homes, then bring them in to install. Restoring the Birney streetcar, which celebrated its 100th birthday on May 25, took nine people nine years. Oatney estimates another car to be a 15-year project.

There’s railroad history, too, including a volunteer-restored caboose and a Rock Island car that houses an extensive donated historical collection of that railroad, which now crosses the city as the Rock Island trail.

“(The volunteers) are all extraordinary, they all have their own gift,” Benson concludes.

Regis Larouere is no exception. He’s been volunteering for 19 years, and serves as a resident encyclopedia of knowledge. Streetcars have always held a fascination for him. Growing up in Pittsburgh, they were the only form of transportation his family had – they didn’t get a car until he was in high school.

A man imbued with transportation information is now dependent on others for his own – to get around, he relies on his wife and a network of helpers, including other volunteers at the museum. He fights macular degeneration, has hearing aids in both ears, and moves a little slower than his beloved streetcars. Still, he summons his powers to illustrate how he begins a tour. The back straightens, the hat is adjusted, and then: a clear, sharp “Welcome to Roswell!”

“(The other volunteers) go out of their way to take care of me,” he says. “They want me here. That sends a really powerful message.”

There is some irony that the museum is located so close to a monument of the downfall of streetcars – if you listen closely, the unending multitude of cars on I-25 are clearly audible. At one point, an extensive streetcar network crisscrossed Colorado Springs, with a stop even as far north as Roswell. But streetcars haven’t run in the city since the early 1930’s.

Preserving that history is important, but the mission of the museum is to get them back into the present, on the streets. The restorations are not just cosmetic – the goal is to refurbish them to run again. A city-sponsored feasibility study was done in 2011. Renewed talk of a commuter rail along the front range, Larouere says, illustrates our region’s need for a transportation ecosystem – railroads, commuter rail, light rail, streetcars. Without the light rail in Denver, he says, two extra lanes would be needed on I-25.

Larouere outlines the positives of streetcars: clean electric power, added tourism, and businesses located on the route. Also, the frustrations of cars – traffic, parking, dents – all vanish with streetcars. Plus, they’re fun, unique and just look darn cool. Along with the obvious infrastructure and funding issues, the greatest challenge, Larouere says, will be fighting car-centrism: we want to be in our own cars, and on our own schedule. To help offset the expenses of operating and maintaining streetcars, and keeping a low cost to ride, riders will be needed.

The museum, like the cars the volunteers restore and their goal of returning streetcars to the rails, is a work in progress. They’d like to organize the trains, and add streetlamps to help recreate the heyday of the cars. The work, and the people who do it, continue on.

“If you don’t have people with passion, you don’t have anything,” Larouere says. “The more passion, the better the organization.” I’m reminded of my arrival earlier in the morning, when a call on Oatney’s phone was heralded by a distinct sound – a train whistle.

Originally written by Jonathan Toman of the Cultural Office and published in the Colorado Springs Independent Abstractions section on June 5, 2019.