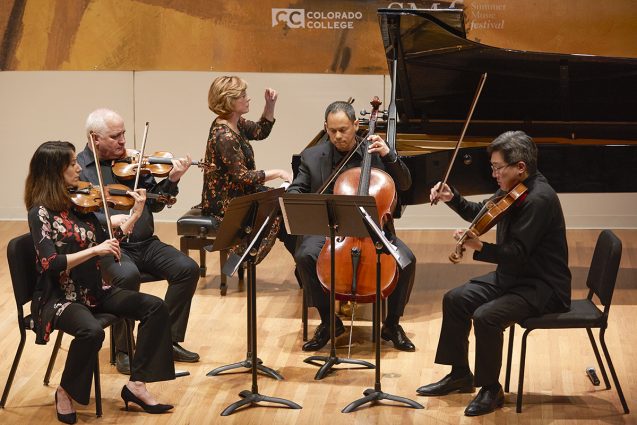 Review: Festival Artists Champion the Cause of Women Composers

NOTE: This article is by former Colorado Springs resident David Sckolnik, now of DeLand, Fla., who is a journalist-in-residence for the 2019 Colorado College Summer Music Festival.

It is predicted that, in the near future, the phrase “women composers” will lose its adjective. Females who have written works of music will simply be known as composers, just like their male counterparts. For now, the gender designation persists. However, on Sunday afternoon, the Colorado College Summer Music Festival presented A Concert of Woman Composers, and the festival artists’ performances made a strong case that the time for dropping gender classification is upon us.

Umoja (Unity) by American composer Valerie Coleman, who was born in 1970, proved a good place to start this campaign. John Kinzie created a textured canvas through a mini-orgy of percussion instruments. The woodwind quintet (Elizabeth Mann, flute; Jonathan Fischer, oboe; Daniel Gilbert, clarinet; Michael Kroth, bassoon; Michael Thornton, horn) entered the soundscape and delighted the audience with harmonic colors that suggested both pastoral and urban landscapes. This short sonic collage was no great challenge for an ensemble of this quality, who seamlessly rendered it toward a charming and inevitable conclusion.

Rebecca Clarke (1886–1979) of England and the United States broke boundaries her entire life and left us with a wealth of chamber and vocal compositions. Her Dumka—composed around 1940 and scored for violin (Ellen dePasquale); her own beloved instrument, the viola (Toby Appel); and piano (William Wolfram)— begins in the world of salon music but takes well-paved detours into more complex expressions. Appel, who knew Clarke, joined dePasquale in an ongoingly beautiful duet while Wolfram provided just the right amount of musical punctuation. It was entertaining stuff that was, at times, haunting or healing but always sensuous.

Classical music had a female superstar in the 19th century. It was Clara Schumann (1819–1896), who has gained traction over recent decades as a composer who could stand alongside her husband, the great Robert Schumann. She was also renowned as one of the most distinguished Romantic-era pianists.

The formidable duo of Scott Yoo (violin) and Susan Grace (piano) took on Clara Schumann’s Three Romances for Violin and Piano, Op. 22 for this concert. We’re accustomed to Yoo and Grace realizing the most challenging pieces written for their instruments. Here, they had only to honor the beauty and elegance of the written notes. This they did perfectly, acting like a time machine that transported all in attendance to the sensation of the mid-1850s. It was the stuff of dreams.

Our second work from a living composer, also an American, came from the pen of 80-year-old Joan Tower, arguably the most influential voice for the advancement of female composers alive. Her Petroushskates from 1980 begins and ends with inspiration from the “Shrovetide Fair,” the opening tableaux from Stravinsky’s ballet Petrushka. Petroushskates’ middle section was inspired by Olympic figure skating. The festival musicians—Elizabeth Mann, flute; Daniel Gilbert, clarinet; Robin Scott, violin; Mark Kosower, cello; William Wolfram, piano—were taxed with animating a shimmering, complicated score which, although but five minutes long, required supreme collaboration and cooperation to be brought to life. Brilliant for both its sound and performance, it was the most stunning accomplishment of the afternoon.

With Joy of the Reunion, we were transported to both ancient and modern China. Its composer, Chen Yi, was born in 1953 and composed this work in 2001. The upper strings—Robin Scott on violin and Phillip Ying on viola—created a sound suggestive of the Erhu, an ancient Chinese stringed instrument. Double-bass player Susan Cahill with her first performance at this summer’s festival proffered a subtle underpinning for the soundscape. Cahill, also a composer, will perform one of her own pieces as a part of the June 18 festival-artists concert. However, the starring role in Joy of the Reunion belonged to Jonathan Fischer. With an extremely high tessitura asked of his oboe, he rang out wild and colorful sounds without a misstep. Those sounds still echo in my mind.

Traditionally, these festival concerts save the best for last. This is when a major piece from the chamber-music literature invariably leaves the audience on their feet as they roar their approval. On this afternoon, it would have to come from a work mostly unknown to the Packard Hall audience, the Piano Quintet in F-sharp minor, Op. 67 by Mrs. H. H. A. Beach.

Beach (1867–1944) was far and away the most well-known American female composer during her lifetime as her compositions stood toe-to-toe with her male counterparts. While this work cannot match the intricacies of the Brahms Piano Quintet or burn with the consistent intensity of the Franck Piano Quintet, it is nonetheless a powerful, emotional, and beautifully crafted work, marinated in longing and nostalgia.

The festival artists ensured that its message came across with purity. This was the second concert for new festival artist Ellen dePasquale. Performing on first violin, she finally had a vehicle with which to prove her ample facility and authentic artistry. The rest of the strings were all longtime festival stalwarts. Violinist Stefan Hersh threw his heart into the music and looked to be having the time of his life. Violist Phillip Ying brought out the soul of the music, and his solo moments felt as if they emerged from the soil. Cellist Bion Tsang had great moments of his own and displayed a patient beauty that projected a mournful but profound expression.

Susan Grace was responsible for holding everything together. This was not music that asked the pianist to contend with the rhythmic complexity of a piece of Brahms’ chamber music, but she produced just the right pulse and attitude to keep the ensemble on task.

Three fine movements culminating in a climax that almost brought down the house. The end result of the afternoon? This was not a concert about women composers. It was a showcase of excellent, sometimes great music, unburdened by gender classification.

On Tuesday night, the festival fellows (students) will showcase their ongoing work with a conductor Scott Yoo orchestra, featuring music by Debussy, Ravel, and Rimsky- Korsakov. But this is just one of dozens of concerts and recitals still on tap. Complete details can be had by visiting https://www.coloradocollege.edu/other/summermusicfestival/.