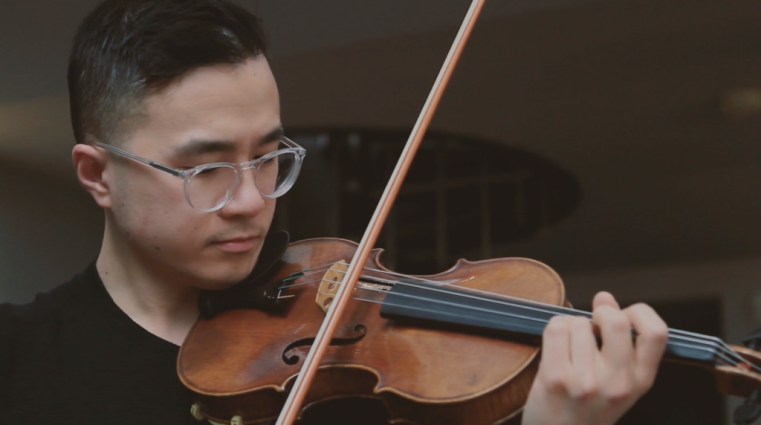 Review: A Finale Fit for a Feast

NOTE: This article is by former Colorado Springs resident David Sckolnik, now of DeLand, Fla., who is a journalist-in-residence for the 2019 Colorado College Summer Music Festival.

Very fitting that the festival artists’ finale was played to a packed house. Still, it boggles the mind of audiences and supporters of the Colorado College Summer Music Festival that there could possibly be an empty seat at any of its remarkable chamber-music concerts, but such is the way of the world at this time of the century.

Hate to invoke obvious clichés, but the best was saved for last, and getting there was half the fun.

All John Kinzie had at his disposal was a wooden box and a pedal hi-hat stand with cymbals. Michael Kroth had his bassoon. These two surely could have made a killing by setting up on a busy street corner with a tip jar. Instead, they performed Gene Koshinski’s jazzy-bluesy Get It! with ceaseless rhythmic invention on box and snakelike singing on bassoon. Susan Cahill (bass), John Rojak (bass trombone), and John Novacek (piano) proved that they could render a jazz ballad “like buttah” with J. J. Johnson’s Lament.

Steven Copes teamed up with Susan Grace for Ravel’s Sonata for Violin and Piano, music more suited for the main course. The duo captured every nuance of the French Basque master’s quirky, cartoonish score. Throughout the three-movement work, Grace produced a sparkling, effervescent sound while Copes used his instrument to produce a parade of characterizations, each possessing a distinct color.

It’s not wise to begin the main course while almost full, but there’s always room for Schubert. Grace was joined by Novacek for the Austrian master’s Fantasy in F minor for Piano, Four Hands. Yes, as Michael Grace’s always engaging and informative program notes suggested, this was music designed for home entertainment and diversion back in the 19th century. Written while the composer was facing the advent of an early death, this composition goes deep into the human experience. The ongoing restatement of an opening sweet lament acts more as a signpost of destiny than a structural device.

Taxed with mining magnificence and tragedy, the pianists sat together confronting the keyboard, never losing their focus or intensity. Gentle, tender moments were mitigated by tough, contrapuntal episodes, realizing the composer’s very personal vision of existence.

As if to refresh the palate, there was no call to contemplation needed for the next offering. Charles Gounod’s Petite Symphonie in B-flat for woodwinds is music purely for enjoyment. This was a relaxing and sensual experience and presented something never before seen at a festival artists’ concert: The number of fellows (five) outnumbered the number of faculty (four) on the stage.

Three performers shared the spotlight. Flutist Julie Thornton and clarinetist Anton Rist were joined by fellow Sydney Hancock on oboe, all equally adept at pouring beautiful melodies into the hall. Michael Thornton (French horn) and Michael Kroth (bassoon) made the most of their declamatory moments, and fellows Tanavi Prabhu (oboe), Bum Namkoong (clarinet), Cort Roberts (French horn), and Wei-Tzu Wang (bassoon) made sure the choir-like accompaniment was seamless and colorful.

Gounod’s opera roots were obvious. The opening movement was like an overture, the second movement had Thornton’s flute singing a soprano aria, and the bucolic scherzo could have been an opera’s ballet music. Only the multitextured finale was distinctly cast for the more concentrated world of chamber music.

Discussed frequently in these reviews this summer has been the almost complete absence of great chamber masterpieces in festival artists’ concerts. So would it be too much to ask that the ingredients contained in the final serving of the night’s music match the brilliance of the artists themselves?

I was not hopeful. Decades of listening to recordings and live performances of Ernest Chausson’s Concerto in D Major for Piano, Violin, and String Quartet had convinced me that this is an overly ripe work, lacking the structural intensity to produce a great musical experience. I discovered that a number of the performers had shared this opinion before they began rehearsing. Color me converted. This was an awe-inspiring performance that resulted in the loudest and longest ovation of the festival.

The leads were Novacek and violinist Andrew Wan, who received his only opportunity at this year’s festival to really strut his stuff. The string quartet was composed of Copes, violinist Stefan Hersh, violist Toby Appel, and cellist Bion Tsang.

The collective intelligence, experience, artistry, and facility on the stage rivaled any ensemble anywhere. Their shared ability to be in the moment and match one another’s sound resulted in that clichéd phenomenon: You could hear a pin drop. So it was after each movement, except the finale, which had to be met with cheers. This occurred even though very few in the audience could claim familiarity with the concerto.

As it should have been, Novacek and Wan were most responsible for this unexpected yet welcome outcome. The violin soloists often gush out romantic interpretations of Chausson’s generous melodies. Wan chose restraint and clarity, allowing details and ensemble to be honored. Novacek was the engine that connected the sound at all times. It was a wonder how he helped to simplify this harmonically rich score while illuminating the subtle textures which are all too often made incomprehensible.

The performance of the string quartet? In a word—generous. Making the most of their few solo moments, they graciously allowed the soloists to be the stars. No egos to worry about here.

Inspired storytelling for a work that I never thought made much sense. When the ensemble geared up for the ultimate musical victory of the finale, one could feel the entire hall joining in the effort to reach that pinnacle. It was thrilling.

It was just like this festival to leave us questioning why for only three weeks every year we get to have this magnificence in Colorado Springs. The only consolation is in the knowing that these great artists will be back next June.