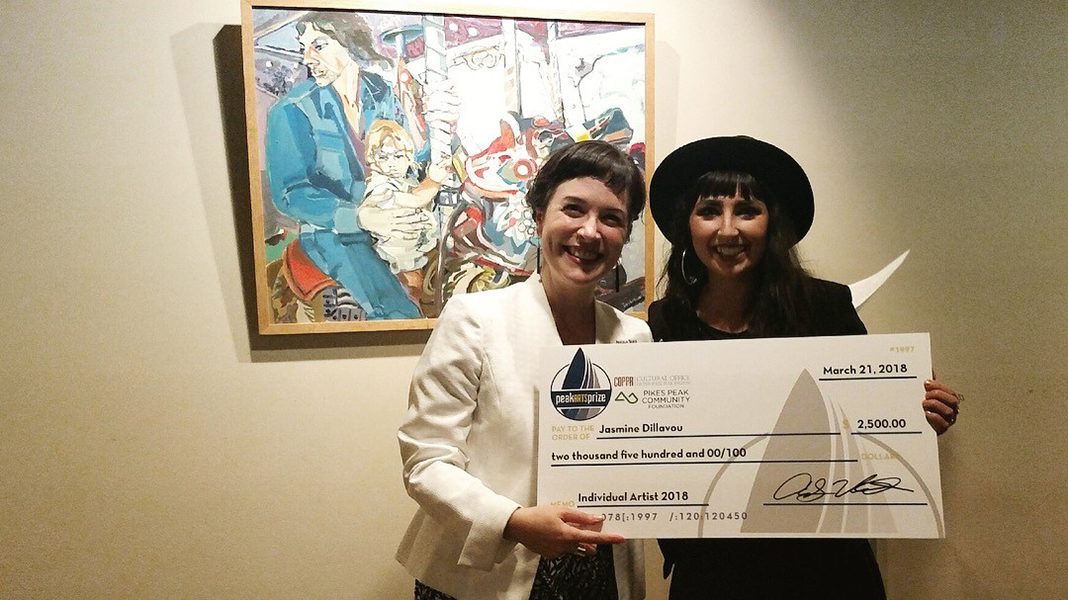 Peak Arts Prize administrator Angela Seals presents Jasmine Dillavou with the 2018 individual artist grant. Dillavou's project, called "100 Potions for Puerto Rico," spread awareness about the forgotten history of Puerto Rico and the tragedy of Hurricane Maria. Dillavou’s project incorporated 10 potion sculptures made by Puerto Ricans living on the island, and her exhibit and artist talks at Kreuser Gallery in fall 2018 expanded her local and national visibility.

What do welding workshops, chamber music and an art exhibit about bees all have in common? They’re all local art projects funded by Peak Arts Prize, which returns for its third year in 2020 with a…

What do welding workshops, chamber music and an art exhibit about bees all have in common?

They’re all local art projects funded by Peak Arts Prize, which returns for its third year in 2020 with a revamped format and added funding. The goal of the program, run by the Cultural Office of the Pikes Peak Region and powered by The Fund for the Arts, a fund of the Pikes Peak Community Foundation (PPCF), is to amplify local arts to new audiences.

After a two-year trial period, during which Peak Arts Prize attracted 77 applications and awarded six grants, the program now offers $22,500 spread across three categories and a new “People’s Choice” award:

Angela Seals, Deputy Director of the Cultural Office, manages the program. She’s excited about the added funding and the potential that comes with it.

“Applicants can think bigger about what would be transformative in their art; it can fuel a bigger leap for them,” she says. “With bigger grants, the ideas will have to be bigger, and I hope more people will go for it.”

For the Pikes Peak Community Foundation, expanding Peak Arts Prize funding deepens the connection with the Cultural Office and helps to expand the Fund for the Arts to a greater audience.

“Increasing the investment in the Peaks Arts Prize will allow for a broader, more diverse applicant pool and reward artists for their time and vision of their project,” says PPCF Director of Community Impact Mina Liebert.

Structurally, the program now separates the judging and public vote components. A panel of expert judges will select the grantees and two honorable mentions in each category. These nine will advance to the People’s Choice round, where the public will choose the recipient of the $1,000. Additionally, community members can now independently donate to finalists directly from the ballot.

Seals and Liebert say the adjustments retain the strengths of both grant making and public engagement, deepening and expanding the impact of the program.

“With the addition of the People’s Choice Award, the public will learn more about the artists and have the ability to donate to their project if they wish, elevating charitable giving across our community,” Liebert says.

Seals calls the added funding a vote of confidence from the Pikes Peak Community Foundation.

“They recognized the strength and thoughtfulness of the first two years of the program and the quality of the art that has come from the six grants so far.”

Seals says the three categories, along with the eligibility of for-profit organizations, help ensure the diversity of the arts community is represented.

“Arts organizations can see themselves alongside others and part of the same arts scene,” Seals says. “They can know and celebrate each other, which is much more exciting than staying in your own lane.”

“I think the project was fresh because it highlighted a marginalized community,” Dillavou says. “It uplifted my voice as a woman of color artist, a voice that is often misrepresented or not present at all in the Colorado Springs art scene.”

“Representing the community more truthfully means expanding beyond only the usual suspects,” she says. “And that leads to raising the visibility of new creatives who are part of the story but haven’t been represented alongside our well-known artistic leaders.”

The prompt for applicants remains the same: Propose a project that will amplify your art and expand it to an audience new to you. It can be for an existing program, but reaching a new audience is a key component — 40 percent of the judging is based on community reach. Ideally, the project reaches a new audience that the artist then retains.

“It was a super fresh concept to do the workshops, and involve the community in work being done at my studio to this extent,” Bliss says. “It is something that I would not have considered before, but because of the grant I have grown a whole new branch of my business.”

“That way it’s not just a one-off that reaches the same audience and nothing changes,” Seals adds. “It forces even the strong folks to reach beyond and see potential in short and long term.”

Seals says mechanisms like Peak Arts Prize are critical to create growth in an arts community.

“Those bridges — all they do is empower.”

Originally written by Jonathan Toman of the Cultural Office and published in the Colorado Springs Independent Abstractions section on January 17, 2020.