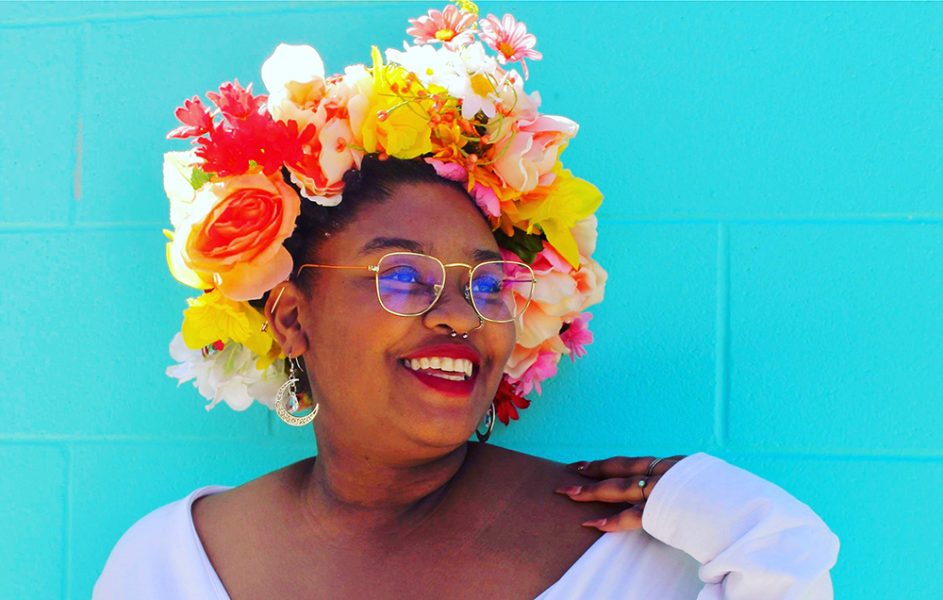 By Kirsten Akens, for Pikes Peak Library District The one word Ashley Cornelius repeats over and over again during a recent interview is community. As the new Pikes Peak Poet Laureate for 2021-22, Cornelius is…

The one word Ashley Cornelius repeats over and over again during a recent interview is community.

As the new Pikes Peak Poet Laureate for 2021-22, Cornelius is devoted not only to the poetry and larger art community but also the greater Colorado Springs community. And she also is very clear that she wouldn’t be in this role today without support from the people around her.

“It would not have happened without the community — largely the BiPOC and queer community of Colorado Springs who have given me the opportunities, who have lifted me up, who have trusted me to take on a leadership role as a part of art,” she says, referring in part to her role as co-director of Poetry719, a local, Black-run poetry group focused on lifting the voices of marginalized communities and BiPOC folks through art and creative self-expression. “I’m so proud of myself, but I also know that this was not a single feat for myself.”

Pikes Peak Library District — now the home of the Pikes Peak Poet Laureate program — spoke with Cornelius about the role, her goals and the impact poetry can have on individuals.

PPLD: Why were you interested in being the Pikes Peak Poet Laureate?

Ashley Cornelius: I think I wanted to be the poet laureate really to diversify what poetry looks like. Poetry is largely super academic. It is largely a little bit older in age, and typically pretty white. And so as a younger black woman in this field, I wanted to just create more representation for poetry in the community. I also grew up here and have a really strong devotion to just making Colorado Springs a more safe and open space for folks.

PPLD: You are very much known across the city, and nationally, as an award-winning spoken word poet. … What draws you specifically to the spoken word component of the genre?

AC: A mentor of mine once said that stories become transformative in the performance. And I believe that so strongly that we all have things that we want to say and voices, but there’s something about performance that engages people and opens doors. … There are many times as a black woman — as a woman in general — people may not listen to me, may not believe me, may not think that I’m credible, but when I’m on stage and when I’m performing, there is a power and a strength that I can carry a message and people really understand it. … I’m a therapist as well, professionally, and so I can use poetry as healing for myself and then also to provide care for community. And I think that is incredibly fantastic that while I’m taking care of myself, I can also support those around me. And that often doesn’t happen in a lot of spaces.

I also just love to perform. [Laughs.] I think it’s so fun and you get to figure out the tone and inflection and determine what’s best for the crowd. And so it really just is an element that I love with poetry.

AC: I think poetry can be really non-intrusive in terms of mental health support. Someone can, you know, write a poem about their experiences and it doesn’t actually have to say anything about what they went through, those details. You could write a poem about, I don’t know, a flower losing its petals, and that may be about sexual assault and you have the power as the author to share that or not. And so I think a lot of folks can find healing in poetry and in metaphor that can be really difficult with verbal processing. For me, it’s so much about the process versus the product. … And we know that there’s a lot of barriers to access of mental health services and poetry feels accessible for some folks. That can be a really strong entry point to starting to talk about their experiences and heal and get that support.

PPLD: Do you think poetry has had a — revival’s not quite the right word, but it feels like there is a new interest in poetry these days. Would you agree with that?

AC: Yes, absolutely. I think there’s a new understanding of what poetry can be. We saw Amanda Gorman at the inauguration use poetry and you know, we’ve just seen it pick up pretty significantly and outside of an academic context. That’s how most people are introduced to poetry, you know: Read Robert Frost, or understand these things. When [instead] I can write a poem about what’s happening in my life. It can be funny. It can be erotic, it could be serious, it can take all of these forms. And I think where we are right now and in the world and processing it, it feels really dark for people. I believe that creation is the antithesis to destruction, so when we are in the darkest times, we see art come alive so strongly as a way for us to heal and communicate.

PPLD: What do you want to accomplish through this role during your time?

AC: I want to make poetry feel accessible across the Pikes Peak region. I think it can, like I said, really rely heavily on academics and I want to show that every single person’s voice is important and valuable and how to harness it. I also want to reinforce that poetry is a part of the artistic community. I think we’re really good in terms of visual arts or sculptures, and I want poetry to be on that same level of, you could walk in downtown Colorado Springs and see a poem just as much as we see beautiful sculptures with the Downtown Partnership. … A big initiative that I want to see is more artists as a part of boards, across the Pikes Peak region so that art is integrated into economic drivers. It’s integrated into nonprofits, it’s integrated into everything that we do, because there is something about art that is so powerful and artists often get pigeonholed into only art spaces. … And I think selfishly, I want people who probably never thought that they could be poet laureate or be in a poetry role to see me and be like, ‘oh wow, maybe I can do it.’ So I really hope to be a model of possibility for others.

NOTE: This article was originally published in the 2021 Cultural Office Guide to Arts Month, crafted in partnership with the Colorado Springs Gazette and published as an insert in the paper on Oct. 3, 2021. See the digital copy in its entirety at https://issuu.com/springsgazette/docs/cultural_office_guide_to_arts_month_2021