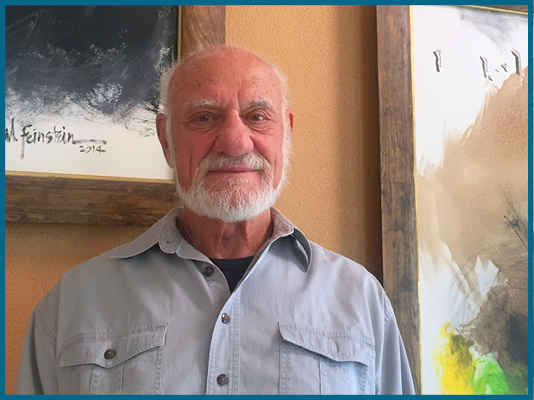 In Al Feinstein’s large paintings, bold blacks, lime greens, tomato reds and golds contort among clouds of white and grey. Standing in front of one, its scale and confidence makes you imagine the artist’s gestures…

In Al Feinstein’s large paintings, bold blacks, lime greens, tomato reds and golds contort among clouds of white and grey. Standing in front of one, its scale and confidence makes you imagine the artist’s gestures as he made it – the wide arc of his arms, the muscular pull and push from his back, his stepping back quietly to choose that next dramatic sweep.

This is abstract expressionism, a modern art movement that is nonfigurative, usually large in scale, and feels spontaneous, unconscious, and even spiritual to the viewer.

Did I mention that he designed his house? Feinstein is also an architect. 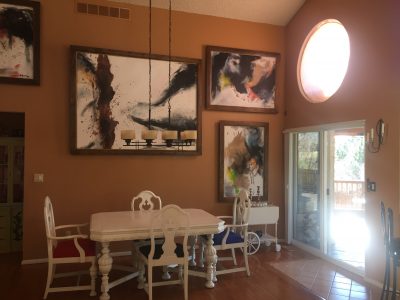 “In order to express myself differently, I decided to create opposite of the way I had to as an architect. Architecture requires thinking on a small scale to depict the ideas on paper, even though the end product is full scale. I decided that in painting I would use not small lines, but large strokes on big canvases with bold colors …” he explains.

Flipping his approach like this has been a source of inspiration, and it’s one he recommends to anyone feeling creatively stuck. “Think about what you want to do by reviewing it backwards, or upside down, or in a mirror,” he encourages. “This opens up the mind to new directions.”

Sitting in his custom designed living room in the morning, light washes over the vivid paintings and sculptures from angled sky lights. Round openings peek through ivory walls, and a stunning ivory fireplace curves up dramatically in the middle of the room. These angles, creamy curves, and circles might remind you of the Margarita at Pine Creek restaurant because Feinstein designed that, too. His newest project, which called him out of retirement, is designing the new Flying W Ranch.

Feinstein has been a prolific artist across decades. But touring his work, you find through-lines across the mediums and the eras and can begin to see the artist’s consistency across it all. From the puddles of watercolor on paper to earthy, floppy-looking clay pots to the timber beams slicing through the air space of his home, you see his belief that wood, clay, paper, and paint should look distinctly like what they are. His humor, his spiritual musings, his travels and time living in Latin America, and the influences of his family all inform his art in any style.

It was a singular joy for me to experience his full collection of work, which is not currently represented by any gallery. Come along with me on a private home and studio tour with Al Feinstein that we broadcast on Facebook live video: http://tinyurl.com/h4k3wj8. Or visit during a future Pikes Peak Studio Tour, which Feinstein participated in for the first time this past October.

In this season of new year’s resolutions, being around prolific, creative forces like Feinstein can make all of us long to be more creative ourselves.

“The key is to simply do it,” Feinstein encourages.
And if you’re a modern art lover or have always dreamed of streaking your colorful emotions across a big canvas, join Al’s efforts as he launches a new group, Abstract Expressionists of Colorado, this coming year. Contact him with your ideas and suggestions.

“I want to build Colorado Springs’ reputation for modern and nonfigurative work.” Feinstein says. And he’s doing it one decade at a time.

Originally written by Angela Seals of the Cultural Office and published in the Woodmen Edition on Jan.4, 2017