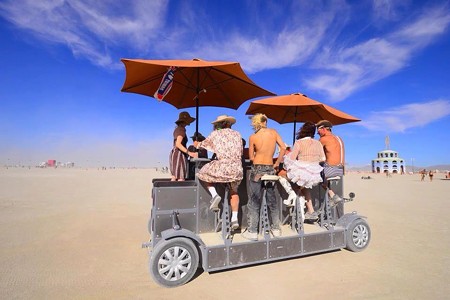 The Levitator Lounge, powered like a bicycle, is one of Chadwell's creations that makes appearances at events such as the Manitou Springs Coffin Races and Mardi Gras parade.

Like many Coloradans, Dave Chadwell occasionally sits next to a creek to enjoy the sights, sounds, and relative quiet. After he leaves, though, he says a thought strikes him: “This creek will still be…

Like many Coloradans, Dave Chadwell occasionally sits next to a creek to enjoy the sights, sounds, and relative quiet. After he leaves, though, he says a thought strikes him: “This creek will still be running exactly how it is, whether I’m there or not.”

Chadwell, who’s lived in Colorado Springs since 1998, approaches life with the idea that things are what they are, and that many circumstances affect how we go through it. “Nothing is set,” Chadwell says. “There are many factors that manipulate the things we say, do and are.” That’s also the motivation behind the name of his business: Tao of Metal.

Tao of Metal originated as a concept for Chadwell, a craftsman crating everything from signs, stickers and furniture to decorative and architectural pieces, to make his own art outside of his regular projects. Trees made of metal — some of which are still housed in his workshop — were only the beginning.

“It started out as strictly the art side of things, now it’s all-consuming,” he says.

But it didn’t take long for Tao of Metal to represent both the art and shop-based sides of the business after ToM moved from its former location to a new home next door to the old Gazette building on Prospect street, last spring.

With the move came a shift away from the retail, and a renewed focus on the custom element of his business. The store simply became too much to handle between job site visits, storing his pieces, and the extra time to market and run a storefront.

“I would do creative work all day long if the market sustained it,” Chadwell says. “Pieces now get done and are out the door. But I do keep [artwork] around to inspire me.”

You’ve likely seen Chadwell’s work, though you might not know it belongs to him. The Cheyenne Mountain Zoo is full of Tao of Metal pieces, as are many fixtures at Trinity Brewing, including the recognizable book arch.

“I enjoy ground-up pieces,” said Chadwell. “Things that are creative and function in a themed atmosphere.”

A batch of custom ToM pieces was recently sent to the Dallas Zoo. Another piece he’s done is mobile — the Levitator Lounge is an eight-person, human-powered vehicle that makes appearances at local events including the Emma Crawford Coffin Races and Mardi Gras parades in Manitou Springs.

Anyone interested in exploring the custom skills of Tao of Metal can reach Chadwell through his Facebook page (Tao of Metal, LLC), or drop by the shop to see if he’s in at 745 E. Pikes Peak Ave.

“(Tao of Metal) has a little tweak onto the creative side,” Chadwell says of his approach to taking on new projects. “I want folks to bring their inspiration.”

If it’s a little out of the ordinary, all the better.

Originally written by Jonathan Toman of the Cultural Office and published in the Colorado Springs Independent Blog on March 2, 2017.