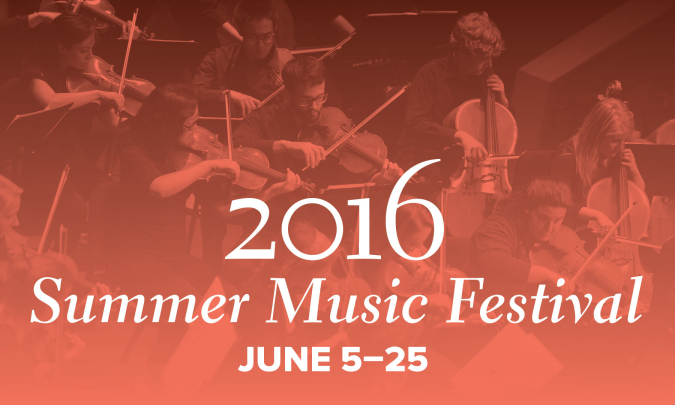 Music Fest Opens with a Flawless Performance By David Sckolnik June 13, 2016 In planning the program for the opening concert of the Colorado College Summer Music Festival on June 9th, music director Sue Grace…

In planning the program for the opening concert of the Colorado College Summer Music Festival on June 9th, music director Sue Grace clearly had one major objective in mind: let all who would come to Packard Hall be lifted out of their everyday trials and tribulations by the power of music.

Oh, there will be plenty of opportunities to probe the depths and anguish of the human condition through the multitude of music that seemingly goes non-stop through June 25. But not on this night.

It took only seconds to set the scene. Through the double bass of Susan Cahill and the cello of David Ying, Rossini’s “Duetto” captured the playful essence of the composer’s roots in 18th century classicism. Incredibly, these two lower register stringed instruments produced the sense of an entire orchestra.

Ying proffered the enthusiastic virtuosity with which he has charmed Festival concert-goers for the past decade while Cahill was even more stunning as she managed to ring poignant elegance out of her elephantine instrument. The fun and beauty never let up through all three movements as the artists played off one another perfectly.

An air of romance arrived courtesy of Mario Castelnuovo-Tedesco and his “Ecloghe” from 1966. Another unusual combination of instruments was on stage: the flute of Elizabeth Mann, the guitar of University of Colorado, Colorado Springs faculty member Colin McAllister and the English Horn of Toyin Spellman-Diaz- her first concert as a member of the festival’s faculty.

Some of my very favorite Spanish music comes from the pen of Castelnuovo-Tedesco, an Italian Jew who spent the lion’s share of his creative life in Hollywood. It seems Andres Segovia and his guitar cast a spell over him in the 1930s. He never recovered. Although the inspiration for these four short moments is said to be ancient writings by the Roman poet Virgil, the presence of a guitar seems to have caused the composer to scent this music with the fragrance of the Iberian Peninsula.

Kudos to McAllister for honoring his role in this. His instrument was the rhythmic soil of the piece and he resisted the temptation to allow it to take on a larger role. This was clear, clean playing; it allowed Mann and Spellman-Diaz to gently discuss the heart of the composer’s vision.

Individually, their tone was magical. Mann’s flute was, as always, imbued with virtuosic beauty while Spellman-Diaz mined profound soulfulness from her English Horn. It was an inspired dialogue that transported all in attendance to a place of gentle beauty.

The concluding work of the concert’s first half, Schumann’s “Andante and Variations, Op. 46,” is a problem piece. Scored for another unusual combination of instruments – two pianos (here Sue Grace and Jon Nakamatsu); French Horn (Michael Thornton); and two cellos (Bion Tsang and David Ying) – the sound can easily be mired in mid-range murkiness. It was the miracle of the evening that this came off so brilliantly.

The score is an expansion of the composer’s great solo piano works that explore the common ground of music and poetry and the ensemble made each variation one to be savored. Despite the difference of sound between their two instruments (New York and Hamburg concert grands), Grace and Nakamatsu created a seamless connection across the stage. Tsang and Ying added the color and texture and the ultimate moment of beauty of the set when they used double stops on their cellos to sound like ancient Renaissance viols. It seemed Thornton was destined to just the warm the sound up until he opened up the triumphant sound of his instrument.

As Schumann wrapped up his variations with an informed restating of his original theme, there was a double dose of sadness. The first was as the composer intended- sweet and reflective. The second was unique to this performance. No one- performers or audience- wanted the sound to cease.

After intermission came the only well-known work on the program: Mozart’s legendary “Clarinet Quintet”. Expectations were high- made more so by the remarks of clarinetist Jon Manasse who described the musicians’ rehearsal process as a “bro-mance.”

It was an all-male affair- violins manned by Stephen Rose and Stefan Hersh; the viola by Phillip Ying; and the cello by Bion Tsang. These are all great players. But there was something else here: The essence of what makes this festival so special.

The real engine of this annual happening is the Festival Fellows… the aspiring students who come from the finest music schools and conservatories in the world and, yes, are great players. Their free Packard Hall “Music at Midday” recitals are to be savored and under the baton of Scott Yoo, their performances as the Festival Orchestra are always stunning. In recent years, many have even been included in the faculty concerts.

Here was a lesson they will not soon forget.

Every moment of this quintet was sublime- exactly as Mozart had intended. Incredibly, the experience went even beyond that.

The collective wisdom on stage coupled with superior facility meant that much more than notes were being rendered. The purest expression of spontaneous art filled the hall. Hearing Manasse freely interpret rhythm and dynamics while the strings supported and responded was completely cathartic.

All four movements benefitted from this loving partnership- it seemed not a single moment was anything less than alive and fresh.

There are many great recordings of this work; many great performances have taken place since it was premiered in 1789. Thursday night’s reading was one for the ages.