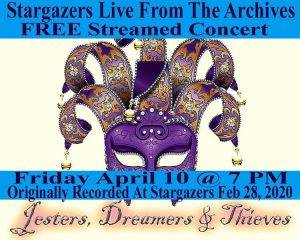 Stargazers Theatre is bringing you their live virtual concert series, “Live from the Archives!

Stargazers Theatre is bringing you their live virtual concert series, "Live from the Archives!

For their first show this weekend, you can see the great group, Jesters, Dreamers, & Thieves.

This live stream archive event will feature a full length concert by Jesters, Dreamers and Thieves is a recording of their first show at Stargazers performed on February 28th at Stargazers Theatre.

Jesters, Dreamers and Thieves are a fresh new band on the Colorado Springs music scene, but is comprised of very experienced and talented musicians and an extremely soulful lead singer with a very powerful stage presence. JDT will take you through a musical journey of blues, rock and soul, covering favorite artists such a Jason Mraz, Edwin McCain, Lenny Kravitz, Chris Isaak, Alice in Chains and many more, they will also play a few of their originals.

For their second show this weekend, they will be live streaming an archived concert from 6035!

This live stream archive event will feature a full length concert by local favorites Classic Rock 6035 and is a recording of their super fun show performed on September, 6 2019 at Stargazers Theatre.

6035 is a rock classics tribute band that takes pride in playing songs that sound just like the originals.

This band has performed at Stargazers many times and is a favorite of Stargazers patrons as well as having been voted one of the Pikes Peak region’s top bands in the Colorado Springs Independent’s Best Of music awards, Gazette’s Expert Pick for Best Performances, Gazette’s Best Cover Band. Come join us for a free dance party in your living room!