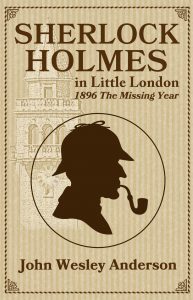 Sherlock Holmes fans the world over have long wondered what to make of 1896; the “Missing Year.” Of the fifty-six short stories and four novels, which constitute the canon of Sherlock Holmes written by Sir Arthur Conan Doyle, one year has remained a mystery – where on earth did Sherlock Holmes and his intrepid friend, Dr. John H. Watson, spend the better part of 1896?

Finally we know! During a chance discovery, in the spring of 2020, a black pocket notebook belonging to Dr. Watson was discovered. The notebook contained Dr. Watson’s personal notes detailing an unpublished investigation of an international counterfeiting ring which drew Sherlock Holmes and Dr. Watson away from their warm flat at 221 B Baker Street, London, England, and across “the pond” to Glen Eyrie Castle, in Colorado Springs, Colorado, a small town in the American west once known as Little London.

John Wesley Anderson, MBA, is a published author, storyteller and TEDx speaker. Growing up on a small ranch in Colorado, John spent endless hours riding horses, collecting coins and reading. One of the first books he remembers reading was The Adventures of Silver Blaze by Sir Arthur Conan Doyle. After graduating high school in 1972 John joined the Colorado Springs Police Department where he enjoyed a 22-year career.

John served six years as a homicide detective and taught criminal investigation courses at the Police Academy. To teach investigative fundamentals, John used quotes from the Canon of Sherlock Holmes, written by Sir Arthur Conan Doyle. In 1995 John was elected to serve as Sheriff for El Paso County, Colorado. After being term-limited in 2003 he retired from a 30-year law enforcement career and was employed by Lockheed Martin. In 2012 John retired from the corporate world to launch a private consulting business allowing him the freedom to pursue his love on writing, history and the arts.

Free but registration required at the "Official Website" link below.