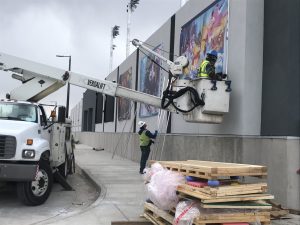 Join us for the LeRoy Neiman Art unveiling on the side of our new stadium in beautiful Downtown Colorado Springs, as we partner with the Downtown partners for their monthly art walk!

On display for the first time beginning at 5 p.m. on First Friday, April 2, the large, vibrant works by Neiman in this outdoor public art exhibit line Weidner Field for an entire block. Each digital reproduction measures approximately 9 x 12 feet. LeRoy Neiman (1921-2012) was one of America’s best-loved artists, celebrated for his rich depictions of musicians and athletes.

An exhibition of his original paintings can also be seen a block away from the stadium at Colorado Springs’ U.S. Olympic & Paralympic Museum, voted the nation’s Best New Attraction in 2020 by USA Today’s 10 Best Reader’s Choice Awards.

Weidner Field is a multi-purpose, sports-centric venue under the brand of “City for Champions,” serving as ambassadors of Olympic City, USA. The venue will feature numerous sporting events, world-class entertainment, educational opportunities, and social and corporate catering events. The new $47 million, 8,000-seat stadium in downtown Colorado Springs is the highest elevated professional sports stadium in the U.S and is home to the Switchbacks football club, who play in the USL Championship soccer league.

LeRoy Neiman (1921–2012) was known for his brilliantly colored, impressionistic sketches of sporting events and the
international high life, which made him one of the most popular artists in the United States.

A prolific one-man industry, he generated hundreds of paintings, drawings, watercolors, limited-edition serigraph prints and coffee-table books yearly, earning gross annual revenue in the tens of millions of dollars. He became a household name in the 1970s through his live paintings on ABC’s Wide World of Sports.

Neiman’s long association with the Olympics began with the Winter Games in Squaw Valley in 1960, and he went on to cover the games, on live television, in Munich in 1972, Montreal in 1976, Lake Placid in 1980, and Los Angeles in 1984, using watercolor, ink or felt-tip marker to produce images with the dispatch of a courtroom sketch artist. Neiman loved all sports and the Olympics was a rich opportunity for him to paint them all, yielding some of his best and most celebrated work.

Last summer, the U.S. Olympic & Paralympic Museum in Colorado Springs opened with a large-scale exhibition of over 100 works by Neiman from his tenure as the official painter of the Olympic Games from 1972 to 2010.

His works are held in the collections of the Art Institute of Chicago, the Smithsonian American Art Museum in Washington, D.C., the Indianapolis Museum of Art, and the U.S. Olympic & Paralympic Museum, among others.