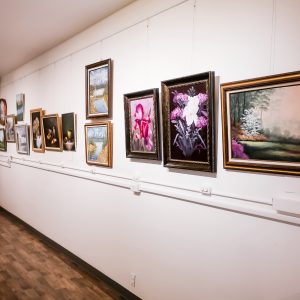 Presented by The Space at The Space

Selected oil paintings of State Farm agent John P. Youngdahl are displayed in celebration of his life through First Friday, June 4, along with an abridged version of our current group show, 'Living Color.'

Living Color will be back on display in its entirety starting Monday, June 7.

Also featured are a collection of small works on paper by Bergen Hoff.

John P Youngdahl started oil painting in the late 1980’s after an eye injury forced him to stay home from work for an extended time. He found his first ‘art teacher’, Bob Ross; on the public television station John had turned on to stave off the boredom he felt being home alone.

John was a salesman and he loved to talk with and help people. John opened his State Farm office in downtown Colorado Springs in 1973 after moving from Minnesota with his wife and their young children. John’s outgoing personality, hard work, honest answers, and willingness to help in all the ways were the perfect fit during his 53-year career with State Farm. He wasn’t just “Like a Good Neighbor” he was THE ‘Good Neighbor’

John created over 70 oil paintings during the years he painted. He also found great joy in “pairing” his paintings with the perfect frame. Christmas and the variety of awesome beauty in the natural world, still and active-life both; were his favored subjects.