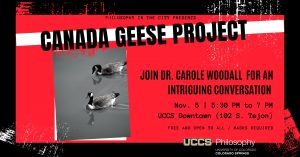 Join us for the Philosophy in the City Series – a series of interactive philosophical events developed and orchestrated by the UCCS Philosophy Department, and held at UCCS Downtown as part of the First Friday Art Walk programming.

On June 27th, 2019, I woke to the news that USDA/APHIS-Wildlife Services in conjunction with Denver Parks and Recreation was in the process of forcibly removing resident Canada Geese from Denver parks and having the geese slaughtered at a facility that was not known at the time. The City of Denver had entered into a contract with USDA on October 18th, 2018. The Cooperative Service Agreement earmarked $150,000 of taxpayers’ monies for the project.

The City Council committee overseeing land use was not obliged to garner a City Council vote given the amount. Denver Parks and Recreations 2019 Canada Goose Management Plan, however, stated explicitly that public support was necessary before advancing on a lethal project. There was no public engagement. In response, Canada Geese Protection Colorado, NP, was formed by concerned citizens from across City and County of Denver.

Over the last two years, CGPC has been working from an anti-oppression sentient advocacy frame to establish collaborative, collation-building networks locally and nationally. The talk outlines the carceral logic of the status of the Canada Goose, and the challenges and approaches to building an inter-species activist network.

Join us for this session to enjoy the art of discussion with the UCCS Philosophy department.

There is street parking, parking behind the building, and free parking down the street.

Please let our staff know if additional accommodations are needed. We want to include all who are interested in this event. 719-255-3994