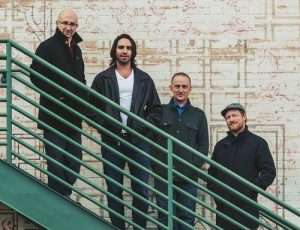 Join us for a wonderful evening of world music at the Black Forest Community Center with Fortunato.

World jazz group Fortunato has been making waves in the Front Range music scene since their inception 2 years ago at a house concert in Nederland. Their unique instrumentation and emphasis on virtuosity with heart has earned them a following of devoted fans.

They’ve gone on to perform in larger venues, jazz clubs, festivals and theaters throughout Colorado. Their unique instrumentation ( violin, guitar, bass, tabla ) creates a fascinating and compelling sound as they weave through gypsy jazz, Indian fusion, and other world musics with ease and virtuosity.

Jazz violinist Anthony Salvo has been composing, teaching and performing for over 22 years. Steeped in much of the world’s musical cultures, as well as embodying an extensive knowledge of classical and jazz idioms, he is a free jazz improviser, gypsy jazz violinist, a crossover fusion musician in Indian, Gypsy, Middle Eastern, and African music. His compositions from his CD, Finding Sanctuary, have been featured in a collaboration with Sound Circle, an 18-person women’s choir, as well as in many theater productions and films.

Alexios Anest is a guitarist born and raised in western Nebraska. He attended the Berklee college of music in Boston where he was a member of the Berklee classical guitar quartet. After Berklee, Alexios finished his studies at the University of Nebraska Lincoln and then was hired to perform all over the world on cruise ships. In between cruises he lived in Granada, Spain learning flamenco guitar from the gypsies. In 2016 he released "Nebraska," which has been featured on NPR, combining flamenco technique with his American roots.

Charles Parker Mertens is a multi-genre bassist, cellist, and producer. He has performed with Thievery Corporation, Les Nubians, and Cyril Neville and can be seen playing with swing fiddle champion Katie Glassman, as well as Tony Furtado, Fox St. Allstars, Analog Son, and many, many more.

Andy Skellenger, a tabla player and percussionist from Boulder, is one of a small handful of westerners to break into the world of Indian classical music performance. He is also a well-known cajon builder. He is a member of a number of ensembles including Miguel Espinoza Flamenco Fusion, The Matt Skellenger Group, and Jam Key Jam.
Doors open at 6:15 p.m.; concert starts at 7 p.m. with two opening acts: Ward Livingston and Moonstruck Melodies. $15 general admission, $8 members and students with ID; free for ages 12 and younger (become a member and save). Admission only at the door (no advance tickets).
Baked goods, coffee, tea, and water available for purchase in the Community Center.

Please visit our website for the latest on COVID-19 protocols at our shows.

Admission only at the door (no advance tickets).

Members and Students with ID: $8

Free for ages 12 and younger (become a member and save).