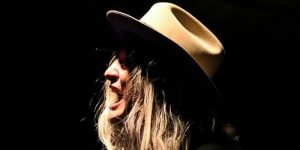 Trying to describe Steve Poltz is like trying to keep a wave upon the sand. Steve is one of those artists that listening to his music online doesn't do him justice.

From his website, this is the start of the story of Steve Poltz:

Some people start life with a plan. Not Steve. He opens himself up to the universe in a way most of us will never be loose enough to achieve, and the universe responds with a wink, a seemingly bottomless well of inspiration, and the talent to truly connect with an audience. While 2021 could have found him adrift, faced with a tour moratorium the likes of which he hadn’t experienced in decades, it opened a door — literally, his friend Oliver Wood of The Wood Brother’s door — to creating an exuberant, thoughtful batch of songs that celebrate life in all of its stages.
The resulting album is called Stardust & Satellites [Red House / Compass Records].

“I just make stuff up,” he exclaims, quipping, “it sounded good to say that.” Steve is the sort of prolific writer and collaborator who downplays what seems like a non-stop geyser of creativity. “I have no rhyme or reason for what I do. It’s all magic. I go by instinct. It just felt right, so I went with it.”
...

With a cult following that includes fellow musicians, regular folks and festival goers who stumble onto his performances, there’s no common denominator to Steve’s fans. Born in Halifax, Nova Scotia and raised in San Diego, CA Steve toured and recorded with San Diego cult favorites The Rugburns (they still play annual sold-out reunion shows). But it was through his creative partnership with Jewel that he vaulted into the national spotlight; co-writing her multiplatinum Billboard Hot 100-busting smash, “You Were Meant For Me,” and continues to work with her to this day.
Over the years, the Nashville-based troubadour has built a fascinating solo catalog, earmarked by his debut, One Left Shoe, Dreamhouse, Folk Singer, and 2019’s Shine On. No Depression crowned him, "A sardonic provocateur with a lighthearted acoustic-driven wit, suggesting at times a sunnier, less psychedelic Todd Snider, or maybe a less wan, washed Jackson Brown,” while the Associated Press dubbed him "part busker, part Iggy Pop and part Robin Williams, a freewheeling folkie with a quick wit and big heart.”

He’s resumed his tour schedule, and when he comes to your town, he’ll say, as he does every night, “This is the best show I’ve ever played.” And hell, maybe it just is.

He’s something of a natural, after all.

...truer words were never spoken. I was fascinated by him & his performance the first time I saw him at MeadowGrass. His performance will leave you in awe and we can't think of a more fitting way to bid COVID adieu!

We ask all attendees to show proof of vaccine and to mask up when they are not eating or drinking.