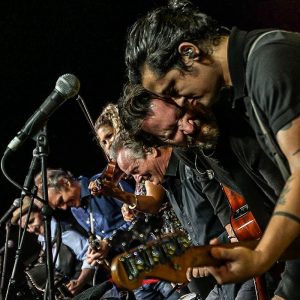 Join us for a night of Celtic Folk Rock with The Elders at Stargazers Theatre & Event Center!

The band was founded in 1998 by six individuals with a passion for music rooted in Americana and Celtic folk rock. From the beginning The Elders seemed to be channeling something ancient and enduring – something unaffected by fads, trends and the giant maw of mind-numbing commercialism. Their ability to bring together the art of storytelling with elements both musically progressive and rooted in tradition, has won them a broad international fan base, as well as critical acclaim in numerous publications such as PASTE Magazine, Folk & Acoustic Music Exchange, Music Row Magazine, Goldmine Magazine, TRAD Magazine (France), Chicago Sun-Times, Kansas City Star and more.

Their critically acclaimed albums serve as reflections of the group dynamic, but fans who are wild about The Elders can tell you that the real magic happens on stage, where their powerful personal and musical chemistry forges a deep sense of community with their audience.