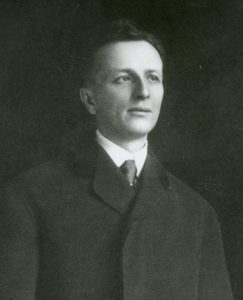 Albert (Bert) E. Carlton came to Colorado to improve his health. Later he and his brother came to Cripple Creek and started a freight hauling business. They formed the Colorado Trading &Transfer Co. which served the mining communities of the Cripple Creek District. Bert Carlton invested in mines, banks and railroads of the area and became known as the King of Cripple Creek because of his financial success.

On July 10th, Leo Kolman, a 2nd generation Cripple Creek native, will portray A. E. Carlton. Kolman was born at the Saint Nicholas Hospital now The Hotel Saint Nicholas in Cripple Creek. He was a resident of CC until 1944 when his family moved to Colorado Springs. He is the Grandson of John Kolman a miner, mine owner as well as owner of other properties and businesses in the Cripple Creek-Victor area. He is a Member of the Gold Camp Victorian Society and enjoys researching and portraying characters from Cripple Creeks past.