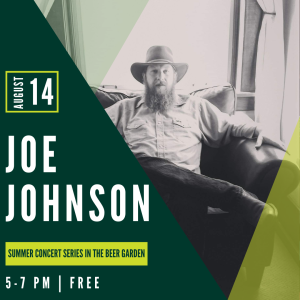 Our Summer Music Series in the Beer Garden is back with a free show featuring Joe Johnson!

Raised an hour drive from New Orleans in Mississippi, a state that has produced the very core of American music, Johnson grew up with great respect for the blues, gospel, and country sound that has defined the area's artistic heritage. Joe's own family has contributed to that great legacy. His Grandfather, the noted early Nashville Country artist B.J. "the D.J." Johnson, was a recording engineer, disc jockey, and Grand Ole Opry performer and many in his family were well known Gospel performers.

Joe began his career in the late 90’s touring around Mississippi before settling for a while in the music-rich city of Hattiesburg, playing house parties and bars like The Thirsty Hippo, T Bone Records, and Gus' Cafe alongside some of the greats in the scene including Cary Hudson, Chance Fisher, Thomas Jackson, Mark Mann, This Orange Four, and countless others.

Since 2004 Joe has called the westside of Colorado Springs home, spending his first seven years fronting the rock and roll band "Creating a Newsense", in the process building an avid cult fanbase while releasing four albums and playing hundreds of shows on the road and close to home while helping to establish the foundation of what is now a burgeoning Colorado Springs music community.