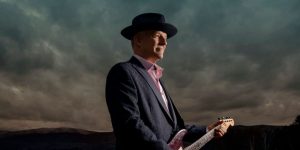 In the trajectory of watching great musicians develop, there is no set timetable. Some appear full-blown right from the start, and others can take a whole career to get to that elevated place. Albert Cummings arrived strong right at the beginning and has kept growing over a course of endless tours and nine previous albums, right up to today with the release of the album TEN. It’s the kind of recording that shows exactly why all the accolades and excitement have been deserved. Now, it’s an irrevocable truth that the musician has made his full-on breakthrough. And it comes at exactly the perfect time, when the world is looking into what might be in store past the challenging experience of the pandemic for the last two years. Music, being one of the world’s tried and true joys of life, has always had a way of bringing healing and inspiration to listeners, and at no time in recent decades has it been needed more than now.

When Albert Cummings started making plans for the sessions that would become TEN, his first sign that this would be a turning point for him was when he connected with producer Chuck Ainlay. With Ainlay’s credits working with Mark Knopfler, both solo and with Dire Straits, and George Strait, Miranda Lambert, Emmylou Harris and many others, it was immediately obvious that this new album would be one for the ages. Cummings knew a new vista for his music was right in front of him. “When you walk into a room with a producer like this, it feels like there is a whole new world of possibilities ready to open up,” he says, “and I felt like things were really turning in an exciting new direction.”

It didn’t take long for exactly that to happen. A dream team of musicians quickly became involved in the TEN sessions, including drummer Greg Morrow, bassist Glenn Worf, keyboardist Michael Roujas and guitarist Rob McNelley. “There was a moment when I looked at the players in the studio with me,” Cummings says, “and I felt giddy. I knew immediately this was exactly the band that I needed to have with me to take my new songs where I wanted them to go. The music that started to be played in the studio sounded like it was being created on a whole new level. I knew in a flash we were onto something.