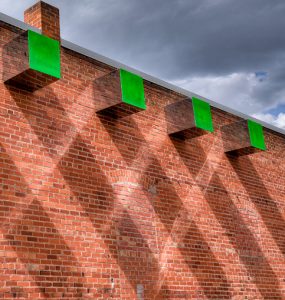 Parallel Universe is by Alec Acita of Berlin, MD.

Parallel Universe explores the manipulation of interactions between the audience and the surrounding environment.

Simple geometric forms allow the focus on the reflective surfaces and what they reveal, or hide, rather than the complexity of the object itself.

Viewers are forced to move around the objects, trying to interact with the work rather than treating the objects as simple mirrors.

The faces of the cubes are made to contrast the dominant reflectivity of the installation, revealing the effect of leaving a preternatural green two-dimensional plane suspended in space, essentially making the physicality of the object completely disappear.