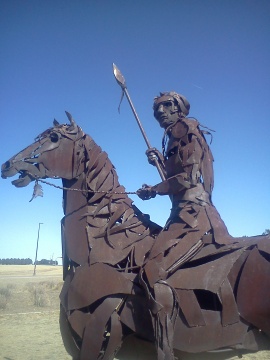 Blota Hunka, “warrior of the plains,” sits atop his horse and surveys the land at the entrance to Colorado Springs Airport. Originally sited at the entrance to the Pioneer Plaza shopping center on North Circle Drive, Blota Hunka was installed and then blessed by Chief Talltree, a member of the Sioux Nation. When the shopping center was demolished in 1995, the piece was relocated to storage and later purchased and installed at Colorado Springs Aiport. The steel sculpture has welcomed visitors to the airport and our region since 2000.

Artists and brothers Don and Charles Green relocated from Nebraska with their farming family in 1940. After attending college on a football scholarship, Don was hired in 1956 to teach at Colorado Springs’ East Junior High School, and he worked for School District 11 for the next 30 years. Don’s first commission as a public artist came in 1978, with the creation of Rearing Horse. Now, after creating public art for more than three decades (including many well-loved landmarks such as the animal benches at Cheyenne Mountain Zoo), the prolific Don has lost track of exactly how many pieces he has sited throughout Colorado Springs and the greater region.