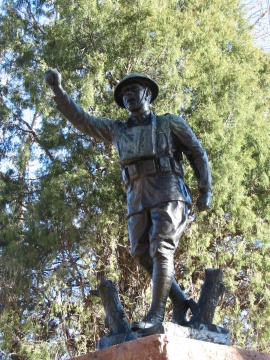 Spirit of the American Doughboy

Located at Evergreen Cemetery, this pressed copper sculpture depicting a World War I soldier was dedicated in 1922 to commemorate war heroes. This piece is one of many original Doughboys from the 1920s, which are currently dispersed throughout the country.

Artist E.M. Viquesney, wanting to convey the spirit of the American soldier who was determined to preserve freedom for the country, created this sculpture to honor those who died, were wounded, or served during World War I.

Interestingly, the Colorado Springs Doughboy is missing his original left hand and rifle. A mismatched left hand without a rifle was later added.