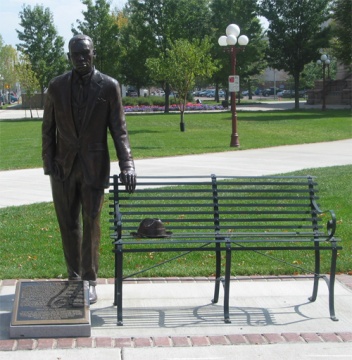 William Seymour, El Paso County’s first African-American juror, stands stoically outside of the Colorado Springs Pioneers Museum, with his hat resting on the bench beside him.

Born into slavery on a plantation in central Kentucky, Seymour homesteaded in Kansas following the Civil War. In the 1890s William, along with wife Elizabeth and their 11 children, migrated farther west and established a prosperous farm and dairy operation near Black Forest. After retirement, the Seymours moved into town, where they were active in church and civic life. In 1903, Seymour was called to serve on a 12-member jury for the first trial in the new El Paso County Courthouse (now the Pioneers Museum.)

Artist Stephanie Huerta was commissioned to create the life-size bronze sculpture as a tribute to “the invisible people of the Pikes Peak Region—black American pioneers who had not previously been recognized for their contributions to the growth and development of the area.” Seymour’s likeness was crafted from pictures Huerta received from his descendants, and the bench he leans against is intended to be historically accurate from the time in which he lived.

Born and raised in West Nyack, New York, Huerta now lives and works in Santa Fe, New Mexico. She says of her work that it shares “the endless beauty of life and the miracle of anatomy–always capturing a unique spirit as if the pieces were alive with soul and something to share.”